Patrick Star is ready to be the star of his own show.

The teaser features Bill Fagerbakke returning to voice the pink protagonist as he stars in his own imaginary variety show and finds his “true porpoise.” Of course, Patrick’s best buddy SpongeBob makes an appearance in the teaser, and we even get the first glimpse of the sea star’s little sis, Squidina.

Produced by Nickelodeon Animation Studio, the 13-episode series follows Patrick and the rest of his family as they are constantly disrupted by Patrick’s wild whims and surreal imagination. The series will debut this July on Nickelodeon. 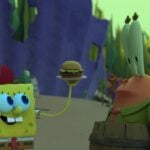 Also Read:
How Nickelodeon Plans to Stock Up on ‘SpongeBob SquarePants’

Per its official description, “The Patrick Star Show” follows a younger Patrick Star living at home with his family, where he hosts his own show for the neighborhood from his television-turned-bedroom. His little sister, Squidina, works behind the scenes to make sure Patrick’s show is always running smoothly, while his parents, Bunny and Cecil and his grandpa, GrandPat, each support Patrick in their own hilariously absurd ways. The Star family’s unpredictable adventures often inform, integrate, and sometimes even interfere with Patrick’s TV show, but one thing is for sure: his bizarre life always makes for great television!

“The Patrick Star Show” is the second “SpongeBob” spinoff series to get the green light, following “Kamp Koral: SpongeBob’s Under Years,” which premiered on Paramount+ in March.

Other familiar voices from Bikini Bottom include Tom Kenny as SpongeBob, Rodger Bumpass as Squidward, Carolyn Lawrence as Sandy, Clancy Brown as Mr. Krabs and Mr. Lawrence as Plankton.

Check out the new teaser here and up top.