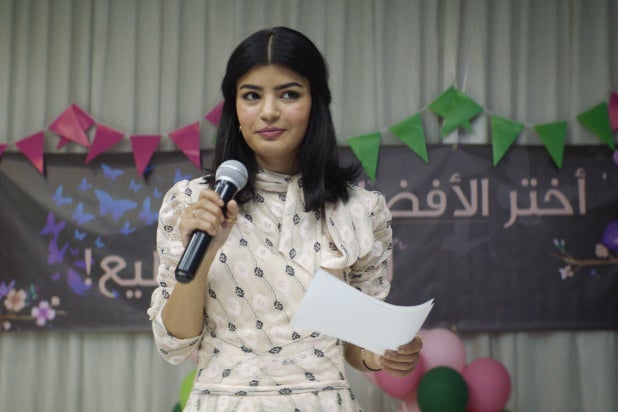 As someone with a side gig on the programming team of an LGBT film festival, I’ve noticed that, while the coming-out drama is often tired and clichéd coming from American filmmakers, it can be thrilling when one is produced a part of the world (Bermuda or South Korea, for instance) where an honest conversation about queer lives is in its early stages.

It’s not a put-down, then, when I say that Saudi Arabia’s “The Perfect Candidate” reminds me of a cycle of Jane Fonda films from the 1970s and 80s — notably “Coming Home,” “The China Syndrome” and “9 to 5” — where she plays women who fight back against their understanding of the world and discover their own voices in the process. And Jane never had to do it while wearing a niqab.

With exquisite subtlety, director Haifaa Al Mansour (“Nappily Ever After,” “Wadjda”) brings us into her heroine’s world and lays out the series of indignations (some tiny, some massive) she is forced to face on a daily basis, so that we understand what’s been keeping her down, the stakes of fighting back, and the triumph involved in speaking out at all.

Maryam (Mila Al Zahrani) is a small-town doctor who gets little respect from patients (an old man brought into her ER after a car accident refuses to let her touch him or look him in the eyes) or her bosses (who suggest that male nurses take care of the old man rather than defend her position as a physician). The road to the town’s one hospital isn’t paved, meaning their driveway is prone to turning into a mud pit, and Maryam would like nothing more than to get a transfer to Riyadh.

When she tries traveling to Dubai for a job interview, however, she’s stymied at the airport because her travel permit has expired. “Who is your guardian?” demands the customs agent; it’s her father Abdulaziz (Khalid Abdulraheem), but he’s a musician who’s off touring with his band, thrilled to be playing for audiences and not just wedding guests for once. (The tour allows Al Mansour to take us to corners of Saudi Arabia most of us have never seen, as the group performs everywhere from open fields to tacky amusement parks to a modern concert hall.)

Trying to sort out her travel permit, Maryam winds up in a bureaucratic maze in which she applies to run for her town council. She has no intention to campaign until she realizes the position would give her the power to finally pave the road to the hospital and to show the men in Riyadh that she’s not just a “hick doctor.” With the help of her sister Selma (a wonderfully sardonic Dae Al Hilali) and over the objections of her ever-mortified teenage sister Sara (Nora Al Awadh), Maryam launches her political career, hosting a women-only fundraiser (this is a country where even wedding parties are segregated by gender) and eventually even attempting to address a group of men, despite local taboos forbidding women from doing so.

(One of the film’s most pointed comparisons of the modern world in conflict with ancient traditions comes when Maryam creates a campaign video for YouTube; Selma uses green-screen effects to add backgrounds and butterflies, while Maryam speaks about the issues with her head entirely covered, lest anyone accuse her of immodesty.)

Al Mansour and her co-writer Brad Niemann skillfully manage to get their message across without banging a gong; it helps that “The Perfect Candidate” tosses a wide net over the excesses of fundamentalism by periodically reminding us that Abdulaziz is also an outsider because of being a musician. (Outlier radicals object to music as well, and at point it appears that terror threats might shut down the tour.) While we’re constantly reminded of the absurd degree in which women are expected to separate themselves from and capitulate to the men, “The Perfect Candidate” isn’t a single-issue movie.

Also keeping the film from being a jeremiad is the warmth and empathy of the performances. Maryam is afraid to speak up at first — she suffered similar stage fright as a child, when her mother tried to make her sing onstage — so it isn’t until late in the film that she firmly and forthrightly finds the ability to defend herself and to decry the rampant sexism that surrounds her. Abdulaziz laments that his daughters are driving him to an early grave, but it’s also clear that he respects their independence and their drive. The fact that all four members of this family are played by first-timers is astonishing; Al Mansour clearly knows how to craft natural, lived-in characters, even with newcomers. (Abdulrahim is a real-life musician, and the film spotlights his talents as a vocalist and oud player.)

The score by Volker Bertelmann (“Hotel Mumbai”) laces together Middle Eastern and Western influences, and set decorator Marie-Catherine Theiler creates Maryam’s world with efficacy, from the gaudily decorated wedding-party spaces to the mud-flecked hospital to the TV studio where Maryam undergoes a condescending morning-show interview.

Maryam’s reconciliation with her dead mother and her family’s tradition of musicality comes off a bit rushed, but it’s the one element of the film that doesn’t feel fleshed-out and fully explored. Otherwise, “The Perfect Candidate” feels like a film that both represents a new era for women in the Muslim world and also one that will help push that movement forward.