Despite the presence of its three charming and impassioned leads, and even as it looks and feels clean, sharp and deftly shot, “The Perfect Guy” — which was, it must be pointed out, deliberately not screened for critics prior to release — is a perfect example of how lame, lazy material strands good actors, resulting in a movie that looks great and feels less so.

Also Read: 'The Perfect Guy' and 'The Visit' to Battle for Box-Office Domination

Directed by David M. Rosenthal and written by Tyger Williams, “The Perfect Guy” stars Sanaa Lathan (“The Best Man Holiday”) as Leah, a driven lobbyist living in L.A. and, at the start of the film, dating Dave (Morris Chestnut, “Nurse Jackie”), an architect who’s crazy about her but not so enamored of the prospect of getting married. (Divorce runs in his family.) She, on the other hand, realizes after a friend’s anniversary party — complete with touching toasts and cute kids — that she wants the whole ball of wax: “I’m 36; I’ve been dating my whole life. I want a husband. I want kids.”

This drives them apart, but a few months later, Leah bumps into Carter (Michael Ealy, “The Good Wife”); Carter is charming and awesome at first. He’s in IT, has smoldering eyes, is well-to-do, a terrific dancer and, on his way back from meeting Leah’s parents in the Bay Area, beats a stranger half to death with his bare hands in front of her for no real reason. She, frightened by the swift shock of his fury, breaks it off. He, now even more enraged, decides on a campaign of retribution until there’s reconciliation: “If I can’t have you, nobody will.”

This is, perhaps, the biggest problem with “The Perfect Guy,” in that it’s a thriller with almost no thrills in it. Ealy, with his handsome face and too-bright eyes, goes from Total Package to Total Sociopath so swiftly and unambiguously that he segues from PDA’s to B-and-E in a blink, and the rest of the movie stamps around in clumsy circles from that point. Leah gets back together with Dave, Carter harasses both of them, LAPD Detective Hansen (Holt McCallany, whose normal roguish charm is given no place to stand by the screenplay) explains why they can’t press charges against Carter for his latest intrusion or imposition. It’s a cycle that goes on until several characters have been beaten to death and the audience has been bored to it. 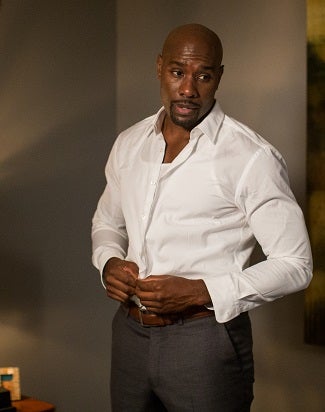 Williams’ script also runs on stupidity the way an 18-wheeler runs on gas: In great quantity, and not always especially quietly. Leah is so resolutely oblivious for the duration of the movie that she might as well be drunk, or blindfolded, or both. This isn’t a reflection on Lathan, of course, just as Ealy’s descent into sweaty, slo-mo revenge-prep push-ups and ominous silent glowering is no fault of his; the script here is so slack and insipid that it sucks any and all tension out of the scenes, the set-up and the plot.

Rosenthal has made an attractive film, but no amount of beauty can make up for the film’s lack of brains. The cinematography, by Peter Simonite (who shot second-unit on “The Tree of Life”), is impressive, capturing an L.A. that has both glamorous highlights and deep shadows. Editor Joan Sobel (“A Single Man,” “Admission”) handles the film’s changes in location, time and perspective with a deft and smart hand. But it’s hard to focus your vision on the film’s technical merits when you’re rolling your eyes at the clumsiness of the storytelling, and our three leads can’t make the lead, dead cliches of the dialogue come alive no matter how hard they try.

“The Perfect Guy” could have been a competent, engaging thriller, or at least a showcase for its talented leads; the tragedy comes in how firmly and solidly it takes so many actors and artists down with it.