“The Perfect Match” opens with two guys betting their playboy best pal that he can’t settle down with Ms. Right, and it ends with a wedding, but these tried-and-true set pieces turn out to be as inconsequential as everything and everyone else in this completely disposable movie. It doggedly follows the well-worn rom-com path, down to saving all the personality and occasional laughs — very, very occasional ones — for the supporting cast.

Former BET and E! host Terrence Jenkins, who rarely lets his focus-group-approved affability down long enough to give a performance here, stars as Charlie Mac. During the week, he’s a successful agent — apparently pulling down the kind of salary that affords him a Hollywood Hills house that’s somewhere between “movie star love nest” and “Bond villain lair” — while in his substantial free time, he takes photos for his devoted Instagram following.

Charlie loves and leaves the ladies, much to the consternation of his coupled pals, who have problems of their own: Rick (Donald Faison) and Pressie (Dascha Polanco, “Joy”) are trying to get pregnant, while Victor (Robert Christopher Riley, “Hit the Floor”) is stressing out over his impending, and increasingly expensive, wedding to Ginger (Lauren London). When he meets Eva (Cassie Ventura, “Step Up 2: The Streets”), Charlie thinks he’s hit the jackpot, since she too wants to keep things fun, casual, and strings-free.

“The Perfect Match” would have us believe that Charlie falls hard for Eva, and that he’s shattered when she doesn’t want to take the next step with him, but Charlie and Eva have both been presented as such hollow outlines that it’s hard to buy his meltdown. While Jenkins is at least amiably blank, Ventura radiates discomfort for most of the film, blossoming only in a sequence in which she models for Charlie. 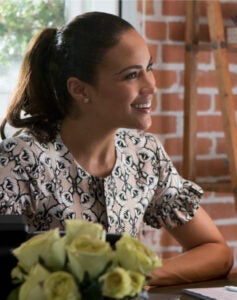 That modeling, incidentally, takes place in an area of Venice, California, that Charlie promised would be “gritty” and “interesting,” and then turns out to be an intersection in the middle of town. That’s about par for the course, since cinematographer Tommy Maddox-Upshaw shoots lots of Southern California locations — from the beach to Charlie’s manse to swanky bistros to a West Hollywood Fatburger — and makes most of them look flat and overcast.

With talented pros like London, Faison and Joe Pantoliano trying to wrest whatever they can from underwritten roles, it’s the walk-ons that steal the show; Paula Patton livens up the film periodically by popping up as Charlie’s sister, an advice-dispensing therapist, while Brandy Norwood, Kali Hawk and Robin Givens score the film’s only big laughs in cameos as, respectively, a pop diva, her frazzled assistant, and a keyed-up wedding planner.

Brandon Broussard, Gary Hardwick and Dana Verde’s choppy screenplay gets similarly uneven treatment from director Bille Woodruff (“Honey,” “Beauty Shop”), and the result is the kind of tossed-off movie that doesn’t even provide the comfort-food delights of a well-made formulaic genre film. Neither the central romance, nor the movie around it, ever catches fire.