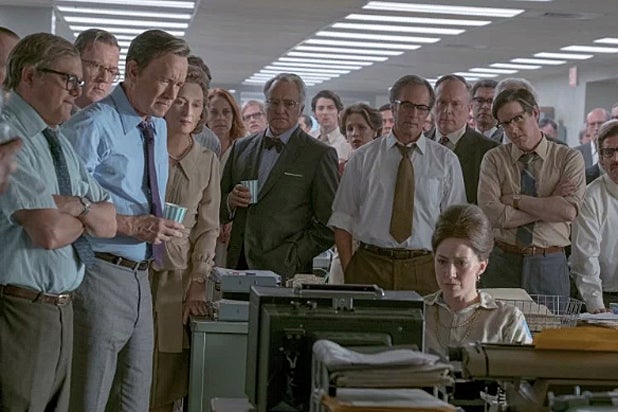 While “The Greatest Showman” isn’t performing as well as Fox might have hoped, the studio still has reason to smile this Christmas weekend as its major awards contender, “The Post,” is off to a great start in limited release.

Steven Spielberg’s recounting of The Washington Post’s acquisition and publishing of The Pentagon Papers opened on nine screens this weekend and is looking at a four-day start of $715,000, good for a per screen average of just under $80,000. The film has had glowing reviews with an 86 percent score on Rotten Tomatoes.

Finally, two other new limited releases hit theaters in L.A. and New York this weekend: Entertainment Studios’ “Hostiles” and Sony Pictures Classics’ “Happy End,” both rolling out on three screens this weekend. Estimates have “Hostiles” making $23,000 over the four-day weekend for a PSA of $7,600, while “Happy End” made $23,800 for a PSA of just under $8,000.

“Hostiles” stars Christian Bale as a U.S. Marshal tasked with escorting a tribe of Native Americans to their ancestral home to give their dying chief (Wes Studi) a proper burial. Rosamund Pike and Jesse Plemmons also star in the film, which is written and directed by Scott Cooper. The film currently has a 67 percent RT score.

“Happy End” is the latest film from “Amour” director Michael Haneke, following a bourgeois family and their barely veiled tensions amidst the background of Europe’s refugee crisis. “Amour” stars Isabelle Huppert and Jean-Louis Trintignant star. The film has a 64 percent RT score.