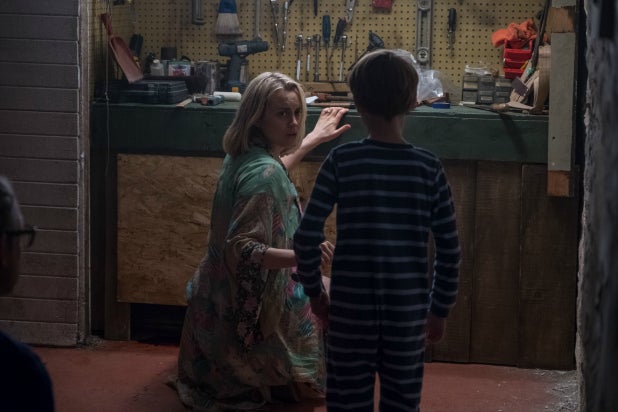 There’s no shortage of films about evil children, so at the risk of indulging in hyperbole, let’s just say Nicholas McCarthy’s “The Prodigy” is the latest. If the idea of a serial-killing pre-teen terrifies you, this film might give off some shivers, but “The Prodigy” doesn’t add anything terribly new to the recipe. Except a little paprika. (Literally.)

Taylor Schilling stars as Sarah, a woman whose eight-year-old child Miles  (Jackson Robert Scott, “It: Chapter One”) has heterochromia (one eye is a different color than the other), and a genius-level intelligence. He also has a nasty tendency to beat his fellow students with a wrench. There’s something terribly wrong with Miles, but Sarah just can’t figure out what it is.

The audience, however, knows exactly what’s wrong from the film’s opening minutes. Miles was born at the exact same time as a despicable serial killer, Edward Scarka (Paul Fauteux, “Frontier”), was shot dead by the police. And just in case the juxtaposition of an evil man’s death and the birth of a new baby wasn’t clear enough, Edward Scarka also had heterochromia. Because whatever deity is in charge of reincarnation in the “Prodigy” universe has a penchant for signing their work.

“The Prodigy” is the latest installment in the “creepy kid” genre, in the tradition of classics like “The Bad Seed,” “The Omen” and “The Good Son” (OK, OK, they’re not all classics). The idea is that a child is, to the audience, obviously evil, but the adult protagonists cannot imagine that their little darling is a monster. In the best of these movies, we wait in rapt suspense for the hero to catch up to us, as the child does one evil deed after another, free from suspicion because “Awwwwww, isn’t he adorable? He could never…”

The genre works because we know that it’s possible, because every serial killer started somewhere, and the telltale warning signs — like hurting animals — often manifest in childhood. It’s easy to be blinded by love and to ignore red flags. But “The Prodigy” tips its hand so early, and provides so very few twists, that the film quickly runs out of material. It’s a feature-length version of the cast of “Monty Python and the Holy Grail” yelling, “Get on with it!”

Watch Video: Hilary Duff Fights for Survival in Trailer for 'The Haunting of Sharon Tate'

We know right away that Miles is a reincarnated serial killer, but it takes Sarah about an hour to figure it out. Which is pretty remarkable since the movie tells her the truth in the first act, flat out, and in no uncertain terms. Miles’ therapist, after only one session, decides that this troubled kid is obviously possessed and outsources her job to an expert in reincarnation played by Colm Feore (“House of Cards”). He tells Sarah flat out that Miles is an evil man trapped in a child’s body, and for a second, it looks like the movie might be getting somewhere, and quicker than you might expect.

But no, we still have to wait for Sarah to catch up, and the film isn’t nearly exciting enough (read: the body count isn’t nearly high enough) to keep us invested that whole time. “The Prodigy” takes place in a sterile, icily photographed world with very few people in it. Sarah and her husband John (Peter Mooney, “Burden of Truth”) have no friends, no family, and god only knows where they work. They seem to spend most of their time looking solemn and worrying about Miles, so it’s not like they have much of an excuse for overlooking his suspicious behavior.

Then again, what passes for “suspicious behavior” in “The Prodigy” is often absurd. We learn quickly that the late Edward Scarka was Hungarian, for example, so we’re supposed to tremble with terror when Miles inexplicably asks his father to pass the paprika. Get it? He likes paprika! He must be Hungarian! You should run! Run for your lives!

“The Prodigy” also suffers from “selective evil genius syndrome,” where the villain is only smart when the plot calls for it. In Miles’s body, Scarka is a cunning master manipulator who electronically bugs his own parents’ bedroom just to get the dirt on them. But when we meet Scarka in the prologue, he’s the kind of criminal who keeps his kidnapping victims locked up two feet from a convenient escape route and confronts the police naked while wielding a severed hand, as though he thinks it’s a gun.

With scenes like that, it’s hard to take “The Prodigy” seriously, but the movie wants us to. It’s filmed like a tragedy, but the story is basically “Child’s Play” without the doll. It’s so broadly constructed, and so inherently ridiculous, that the film’s tensest moments often elicit giggles instead of shrieks, like when Miles goes Hannibal Lecter on his would-be hypnotist. It’s such a massive shift in tone that laughter is a perfectly reasonable, although almost certainly unintentional response.

There’s no sense of irony here, no twisted pleasure to be had. Even the film’s thin attempts at subtext fall apart, because there’s no room for doubt. Miles isn’t a case of nature vs. nurture, and he doesn’t represent the real-life fear of raising a psychopath. The parents are innocent, and so is Miles. The fantasy is just too literal, from the first scenes onward, for “The Prodigy” carry any deeper meaning.

So we’re left with a film that’s too broad to be scary, and too morose to be campy. A few good jump scares can’t save it, nor can the thoroughly capable performances by Schilling and Scott, who try their best to be believable and usually succeed. “The Prodigy” may offer some shocks to those susceptible to this genre, or who have never seen it before, but to horror fans it will probably seem unremarkable and even bland.

Maybe they should have added more paprika.

"Quiet town, peaceful, low maintenance. It can stay that way," says a federal agent to the sheriff of the small town at the center of the new ABC drama "The Crossing." Yeah, good luck with that. In TV and movies, crazy, creepy, sci-fi, monster movie junk always goes down in quaint, tiny, Middle American suburbs far more often than it does in a big city. Who has time for aliens in New York? Give me a full on invasion or nothing. Leave the odd-goings on and the mysterious, unsolved disappearances to the town folk. This list charts the history of America's fictional small towns from kind of creepy to David Lynchian-grade bananas.