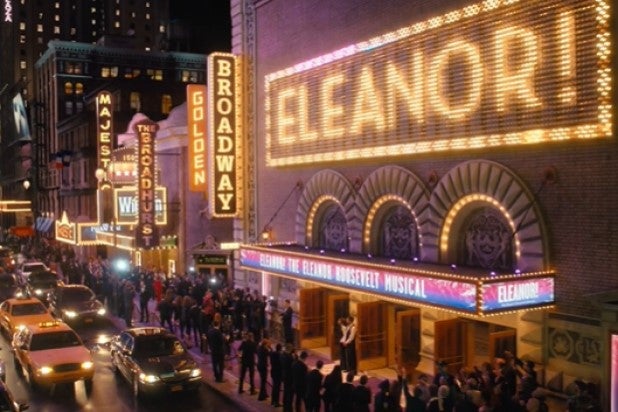 Much of Ryan Murphy’s star-studded “The Prom” is set in Indiana, around the high school that is the location of the film’s title event. But the first 13 minutes of the movie take place on a block of the Broadway theater district in New York. That’s where Meryl Streep and James Corden are introduced, having flopped in a musical of the Eleanor Roosevelt story. They seek refuge at the famed Sardi’s restaurant across the street, teaming up with Andrew Rannells’s bartender and Nicole Kidman’s showgirl, and setting the plot in motion.

During the first two musical numbers in the film (now streaming on Netflix), that stretch of 44th Street is dazzlingly bright and alive. True to form, the location itself lent a bit of theatrical flair to the proceedings. After the production was denied permits to shoot on the actual spot in New York City, “Netflix was like, ‘Well, why don’t we build Broadway?'” Murphy told TheWrap. “So that’s what we did. I could not believe how real it looked. We built all those theaters and marquees. There’s a tiny bit of CGI work at the end, at the horizon. But most everything that you see is really us.”

For the job of rebuilding New York, Murphy turned to production designer Jamie Walker McCall, a frequent collaborator whose credits in the Murphy-verse include “Pose,” “The Politician,” and “The Assassination of Gianni Versace: American Crime Story.” Over a period of about six months, McCall transformed a four-acre empty lot in downtown Los Angeles into the bustling city block of light bulbs, yellow cabs and theater marquees in “The Prom.” She explained to TheWrap how she did it.

What was your reaction when you found out you’d be building New York in L.A.?
Funny enough, when I got the call to do “The Prom,” I was working on “Pose” and I’d been staying right near Rockefeller Center. I just popped over to see the musical of “The Prom,” which was still playing on 48th street. And afterward I just kind of roamed the streets of the theater district. I was looking for which block was the most inspiring, or what elements could be pulled together.

Where did you go?
I walked a lot around the area of 44th and 45th streets. That’s where the Shubert Theatre is located. I went to Sardi’s multiple times. My first step in the process is always doing a mood board. And when I pitched my mood board to Ryan [Murphy], it had a lot of lights and color. It wasn’t just 45th Street in reality. It was a bunch of things, things that inspired me, some things which weren’t even New York-related. Fred Astaire. Old movies.

And you actually went to the street with a tape measure and got exact dimensions?
I did. When I was in L.A., we used Google Maps. You can get a pretty accurate measurement by using the scale they provide. But also at this time, I was working on two shows that were shooting in New York. That ended up being a huge help, because I was flying back and forth from L.A. to New York weekly. So I would leave L.A. each time with a big list of things that needed to be measured, like the distance from the Shubert to the curb, or how many taxi cabs are in the street at eight o’clock. Or how many light bulbs are on a marquee. And then I would just walk over and pull out my tape measure.

Also Read: How Ryan Murphy Got Meryl Streep to 'The Prom' - and Then Got Her to Rap

Is the New York City block that we see an exact scale replica of the real thing?
Sort of. We took some artistic license. Sardi’s is not exactly right across the street from the Shubert Theatre. But we wanted that large “Eleanor” sign right in the window from the second floor of Sardi’s. So I decided to move it a little bit west, to give it more throw from what we were designing as the end of the street. We took some liberties here and there.

But that seems to add to the magic of the sequence. It is somewhat a dream version of Broadway.
Yeah. Ryan had said, “I want there to be lights upon lights.” For the lighting to really pop and be cinematic. Also, everything was wet, as if it had just rained. So we always had a constant wet down on the set, so the lights would reflect even more. We decided that we wouldn’t force ourselves to depict one street. We would combine elements of a few different streets in the theater district. I had the painters go in and put dark lines in between all the details, sort of like the soot that stuck in the nooks and crannies. It sharpened the background and gave it some comic book pop.

There is a sort of uncanny valley quality to the scene.
Well, somewhat that’s due to the fact that practically every building in New York City has scaffolding in front of it. It’s not quite as beautiful looking that way. I put myself in the position of an actor on Broadway. That’s such an amazing achievement just to get there, so the way that they see it, everything is heightened. I may go to New York City and just see all the scaffolding, but these actors on Broadway don’t see the scaffolding on Broadway. It’s a magical place for them.

And just the deep background section is CGI, showing the length of the city block to the horizon?
Yes. And when we were working in post-production, I really needed to see the depth of the city block, so I called in a favor from a friend. This was during the COVID shutdown, when there was a curfew in the city, but my location manager friend Mike Buonanno, he was able to coerce the police officers to let him onto the street at night. And he was able to get me a fresh shot of how it looked.

And the street must have been deserted too.
It was. I was prepping in the summer and early fall of 2019, so I feel like every single shot when I was there on 44th street, there was a gigantic tourist bus right in my eye-line.

Were you there on the set when the actors first saw it?
I stay in the shadows, respectfully. I’m in earshot in case someone has a question. But from seeing their faces, they seemed like they were happy about it.

Ryan said that when Meryl Streep and James Corden and Nicole Kidman showed up for the first night of shooting, they were just all gobsmacked. They really did feel like they were on Broadway.
I’m honored. But that’s another reason why, for Ryan and I, it was really important to turn the opening musical numbers into something that really popped on the screen. We wanted it to be a sequence that was deserving of their caliber as actors.

You must feel melancholy when this block of Broadway had to be torn down.
Oh, it’s heart-wrenching. All that hard work just goes away. The stuff is taken to a prop house or recycled or donated. I’m such a purist and I appreciate the craftsmanship that goes into this work. And while I applaud all the digital advancements that are happening, I still love the old Hollywood flavor of it when you build something from scratch and have the actors step into that world. There’s something fantastic about it for us and the audience.