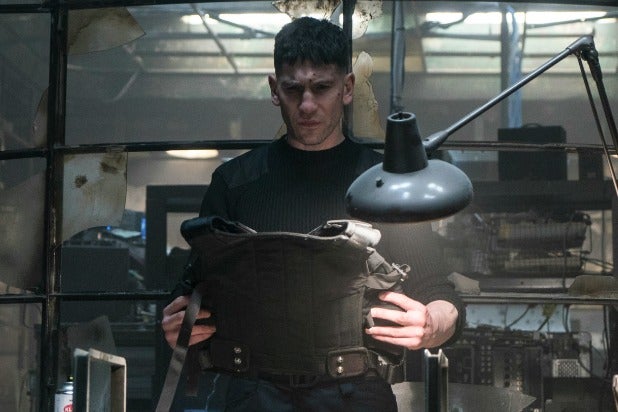 Before now, it wasn’t too hard to figure out which of Marvel’s Netflix shows was the best — there was “Jessica Jones” and then everything else. “Luke Cage” started off well but fell apart in the second half. “Daredevil” is goofy fun but totally incoherent. “Iron Fist” and “The Defenders” were both disasters. But “Jessica Jones” somehow managed to be an Actually Good TV Show.

Now it has competition, in the form of “The Punisher,” which also manages to be actually just good. That’s somewhat of a surprise — it seemed like somewhat of a bad idea to give a character like Punisher (or as he’s traditionally known in my home, “Murder Guy”) his own show. And given Marvel’s TV track record there didn’t seem to be much reason to have faith in the concept.

But, somehow, showrunner Steve Lightfoot and his crew pulled it off. This version of Frank Castle, played by Jon Bernthal operating at his peak, is a real human character who has far more depth than just “Murder Guy.”

In fact, this first season involves little in the way of the Punisher hunting folks down and killing them — when it comes time for Frank to hand out punishments, it’s because folks came after him or someone he was defending. And he certainly kills far fewer people in general than he did when he was introduced during “Daredevil” season 2.

“The Punisher” kicks off with Frank dealing with what he believes is the remainder of the people involved in his family’s murder. After that, he tosses his skull vest in a garbage can and goes into hiding as a construction worker named Pete — Frank is officially dead, and nobody knows he’s alive aside from one of his old Marine buddies. He exposes himself a bit when he kills some gangsters who are about to go after one kid he knows at work, coming to the attention of a hacker named Micro (Ebon Moss-Bahrach).

Micro is also officially dead too, having been caught up in a government conspiracy — the same government conspiracy that swept up Frank. “Daredevil” presented the idea that Frank’s family was killed by accident, caught in the crossfire of a drug deal gone wrong. It turns out the murders were intentional, and there are more people for Frank to add to his list of people to kill.

What makes the whole thing work, though, is that “The Punisher” emerges defies expectations in terms of genre. It’s not action (though it occasionally does have action), but rather is a noir mystery. Frank’s story is not about hunting and meting out justice with his guns. It’s about unraveling the conspiracy and dealing with the specific people responsible. This Frank Castle is still super-anguished but, thanks in no small part to his partnership with Micro, he’s not reckless. This is not the unhinged Frank Castle we saw on “Daredevil.”

Meanwhile, over in the Department of Homeland Security, agent Dinah Madani (Amber Rose Revah) is investigating the same conspiracy, which originated in Afghanistan — where both Frank and Madani were stationed. Also in the middle of all this is Billy Russo (Ben Barnes), another of Frank’s old squadmates who now runs a private military company called Anvil (those names will be very familiar to fans of the “Punisher” comics).

Like all good noir stories, “The Punisher” can be very dense at times, but in a surprising twist for a Marvel show it does all come together in a way that makes sense. It keeps a handle on its various plot threads, paying all of them off — this is nothing like “The Defenders,” a show full of threads that don’t go anywhere, or “Daredevil,” which creates threads all over and never attempts to reconcile them. “The Punisher” actually holds itself together as a thematically cohesive unit.

Speaking of which, the politics of this iteration of “The Punisher” are very interesting. Frank’s new tendency to wait for bad guys to come after him before he strikes removes a lot of the Reagan-esque baggage the character usually has.

In general, this show is not really thinking much about being left or right. It’s about those with privilege taking advantage of those without. It’s about the hypocrisy of those running the country; one of the best scenes has a congressman pushing gun control legislation chatting about the flexibility of his principles with Russo, who he hired to protect himself from a domestic terrorist who publicly threatened him. The irony is thick and tasty.

It’s key that the CIA boss behind everything is someone who was born rich — everything that happens on the show is a corruption that he caused. The show isn’t trying to make some kind of grand, obvious statement, and it’s also not trying to avoid politics completely. Instead it has a laser-like focus on the humans involved, demonstrating an uncanny understanding of all of them.

It’s the cast who really bring it home. Bernthal specifically is at his absolute best here — a lesser performance could have derailed this attempt at a sort of new-look Punisher. Those surrounding him — Amber Rose Revah (a name you’ll want to remember), Ben Barnes, Ebon Moss-Bahrach, Jason R. Moore, Paul Schulze, Michael Nathanson and Daniel Webber in particular — hit just the right notes.

I almost want to declare the existence of this “Punisher” show a miracle. I don’t know, really, what I was expecting from it, because from the moment it was announced it didn’t really feel like it fit with the other Marvel shows on Netflix. And aside from a few appearances by Karen Page (Deborah Ann Woll) and a couple cameos by very minor characters from other shows, it really does just go its own way.