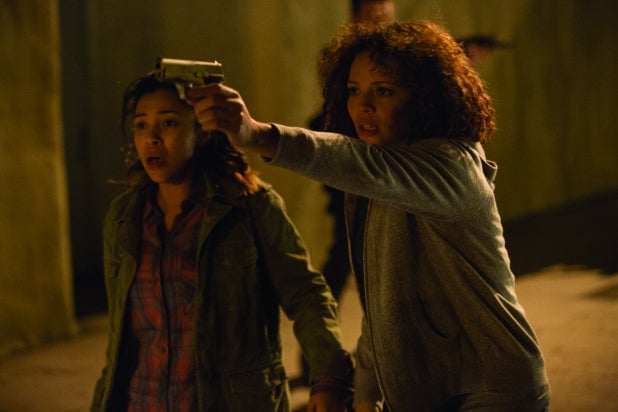 Like a 13-year-old know-it-all, “The Purge: Anarchy” reveals its bone-deep inanity by trying to appear smart. Last year’s surprise horror hit, about an annual 12-hour period in which all crime is absolved and even encouraged, had a genuinely fascinating premise at its core with a novel twist on the current dystopian trend, a dash of real sociological insight, and an anthropological undercurrent of cathartic violence dating back to Old Testament days.

Writer-director James DeMonaco then squandered his mash-up of “The Hunger Games,” crude race and class critiques, and the myth of the sacrificial scapegoat on a myopic home-invasion story and angered many viewers in the process.

DeMonaco receives a do-over in exploring his premise with a sequel, but he delivers more reasons to disappoint fans by upping the body count instead of the IQ. Whereas the original film benefited from tight plotting and relatively small but well-defined stakes by focusing on a single family, the unwieldy, overly complicated “Anarchy” zooms out to follow too many characters and to pad the picture with unnecessary and increasingly dull mayhem.

Even worse, because it relies on a kind of homicidal class rage to fuel its id, an impulse that only lives in the minds of paranoid wealthy lunatics who compare calls for financial reform to the Nazi Kristallnacht in the pages of the “Wall Street Journal.” “Anarchy” ultimately feels a movie made for an audience that doesn’t exist.

Instead of the well-heeled nuclear family in the first film, “Anarchy” features characters who represent a society on the verge of collapse through its focus on a quintet of refugees from broken families: a single mother and her teenage daughter, a divorcee with a dead child, and a young married couple in the midst of breaking up. None are moneyed, which in this one-percenters’ world means that they have become the prey of the evil rich.

Downtown LA becomes a deadly obstacle course for Eva (Carmen Ejogo) and Cali (Zoe Soul), a mother and daughter from the projects who are rescued from an attempted kidnapping by a Bruce Wayne-like figure known only as Sergeant (Frank Grillo). Like nearly everyone else not cowering in their homes on Purge Night, Sergeant is out for blood — except he has only one target, the man who got away with killing his young son.

Eva, Cali, and Sergeant are joined in their effort to find refuge from the Purge’s self-appointed gladiators by bickering spouses Shane and Liz (Zach Gilford and Kiele Sanchez), who were caught in the midst of the massacre when their car broke down just minutes before the night began.

The quintet gradually uncover two warring corps fighting for the future of the Purge: the trained and technologically advanced squad that tried to abduct Eva and Cali, and a righteous underground guerrilla cell meant to evoke the Black Panthers through their dark berets, faux-military garb, and political anger over the Purge’s injustice. The annual day of reckoning disproportionately affects the poor, argues their leader Carmelo (Michael K. Williams), though there’s an unspoken racial aspect to the violence too.

Ultimately, “Anarchy” is too cartoonish in its politics to gain the allegorical resonance it clearly strives for — and worse yet, it’s just no fun. An early scene involving a drunk neighbor threatening to rape Eva and Cali during the early hours of the Purge is as harrowing as the film ever gets, especially when it becomes obvious which of the characters the script will keep safe, thus deflating the film’s sense of danger. Too much of the plot just has the quintet running around the city for no reason while bodies meet bullets in lots of different but not necessarily interesting ways.

The down-home cheeriness with which government and media representatives wish viewers a happy killing never gets old, but that’s a stark contrast to the film’s permeating sense of self-seriousness, which culminates in a third-act reveal that’s become silly from familiarity and seems tacked on primarily to set up for a threequel.

Perhaps it will be good for DeMonaco to get yet another chance to get the Purge right; so far, he hasn’t done it justice.