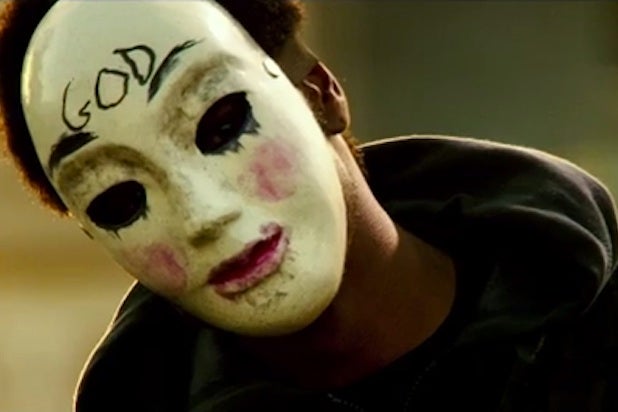 Universal’s Helter Skelter sequel, “The Purge: Anarchy,” made away with $2.6 million in 2194 theaters at the Thursday night box office, lower than last June’s original opening night but still a solid evening for a $9 million film.

“The Purge” was a surprise smash last year, earning $3.4 million on Thursday night on its way to a $16.7 million Friday and $34 million opening weekend. Ultimately, the Ethan Hawke-starring movie, about a future American in which all crime was legal for one 12-hour stretch per year, made $64 million in the United States, and $89 million internationally.

The new film stars Frank Grillo and is more focused on a perverted version of the populist rage that fueled Occupy Wall Street and politics today, and has largely scored better reviews, with a 55 percent on Rotten Tomatoes compared to the original’s 38 percent.

Meanwhile, Sony’s raunchy comedy “Sex Tape,” which features Jason Segel and Cameron Diaz as a couple who somehow send their copulation selfie to all their friends via cloud technology, earned $1.1 million in 2457 theaters after scoring routinely negative reviews.

Sony notes that it’s hard to compare comedies; “The Heat” made $1 million in 10 pm showings last year on its way to a $39 million opening, while “We’re The Millers” took in $1.7 million on a Tuesday before earning $26 million.

Both of these films may fall to the second week of “Dawn of the Planet of the Apes,” the well-reviewed sequel that won last weekend and was up to $90 million domestic and $123 million worldwide after five days in theaters.