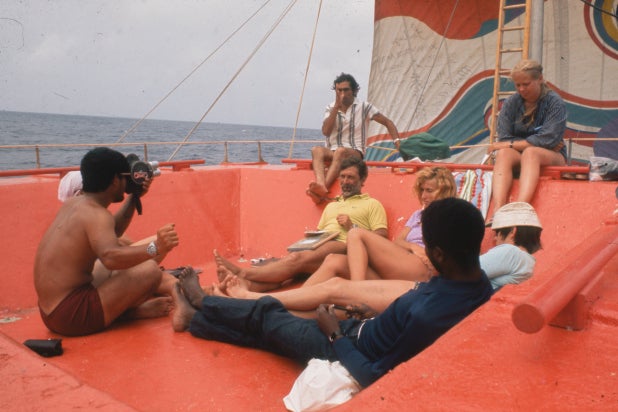 What could possibly go wrong when ten beautiful strangers — six women and four men — are thrown together in cramped quarters for a closely observed transatlantic voyage? Surprisingly, not the kind of wrong Mexican anthropologist Santiago Genovés had hoped for when he conducted this very test in 1973, putting his chosen guinea pigs on a set-adrift steel raft named the Acali that he envisioned would turn into a hotbed of interpersonal strife and aggression.

As Swedish artist-filmmaker Marcus Lindeen’s documentary “The Raft” compellingly retells with the help of archival footage, new interviews, and artistic reconstruction, this one-of-a-kind experiment in human behavior — which Genovés called the “Peace Project” — wound up revealing as much about its controlling mastermind as it did the searching souls he recruited for what became 101 days of extreme waterborne isolation.

It’s a fascinating story of endurance, shaky scientific methods, and solidarity that’s been given a thoughtful resurrection thanks to the writings of Genovés himself – acted in voiceover by “Zama” star Daniel Giménez Cacho – and the recollections of seven participants (all of the trip’s six women and one male survivor), who were reunited by Lindeen and filmed on production designer Simone Grau’s full-scale reconstruction of the raft in a darkened soundstage.

Also Read: 'Echo in the Canyon' Film Review: Documentary Takes a Hazy Look at a Key Moment in Rock History

The replica setting is the kind of aesthetic choice that’s occasionally striking as a commentary on scientific testing as stagecraft, and sometimes just archly obnoxious when Lindeen has them recreate certain parts of the journey. But it’s a gimmick that at least doesn’t get in the way of the Lindeen’s goal of bringing to vividly recalled life a slice of gonzo ’70s experimentation.

Genovés’ idea was born of a thirst for understanding our warlike natures and the seeds of societal violence, inspired by changing social structures and increasing global unrest (including his own recent experience as a hostage in a plane hijacking). Today, of course, it’s likely to be viewed as an unintended prototype for our ubiquitous bikinis-and-attitude summer reality shows along the lines of “Bachelor in Paradise” or “Big Brother.” (In the press, it was mocked as the “sex raft.”) But to Genovés’ mind, his floating lab was a serious venture, albeit one strategically cast and engineered to fill up a glory-seeking scientist’s notebooks.

The participants came from different nations and backgrounds — including a Japanese photographer (Eisuke, the documentary’s only male reunion member), a French scuba diver (Servane), an Angolan Catholic priest (Bernardo), an Israeli doctor (Edna), a Swedish sea captain (Maria), and an African American engineer and mother of two (Fé) — but where Genovés was looking to stir things up was in creating an oceangoing battle of the sexes. He put the women in power (Maria as captain, Edna as raft doctor) to test the men’s reaction, and he relied on an alchemic confluence of skin-baring, flirting, and his regularly sex-specific questions (regarding masturbation and the subjects’ desire for each other) to create couplings and tensions.

While the 16mm footage from the Acali doesn’t always signal these undercurrents, editors Alexandra Strauss (“I Am Not Your Negro”) and Dominika Daubenbüchel do a deft job of weaving the chronology of onboard events from that visual record, the survivors’ modern-day conversations and perspectives, and Cacho’s richly performed reading of the anthropologist’s words, which have a florid psychological trajectory all their own.

There’s also a quietly touching moment in which Fé, through tears, shares with fellow American passenger Mary the time on the raft she realized that she was a black woman making the same ocean-crossing that slaves did, and how she could see and hear her ancestors below calling to her. Learning that Fé never even mentioned these heavy feelings to anyone during the voyage becomes another reminder that, had Genovés not devolved into a toxically controlling male figure, he might have discovered enlightening avenues to explore in how his subjects were processing this unusual journey.

At a certain point you may wonder why “The Raft” hasn’t been turned into a full-blooded dramatization yet, since it’s got everything: a high-concept premise, big ideas, unexpected conflict, base urges (yes, there was sex), twists, turns, weather, action, and a diverse cast in which looking good with little on is historically accurate. But until Antonio Banderas plays Genovés, with Alicia Vikander as Maria and Letitia Wright as Fé (just starting the conversation), Lindeen’s documentary is a sturdy, eye-opening account of a trip in the name of science that laid bare just how complicated human beings can be.