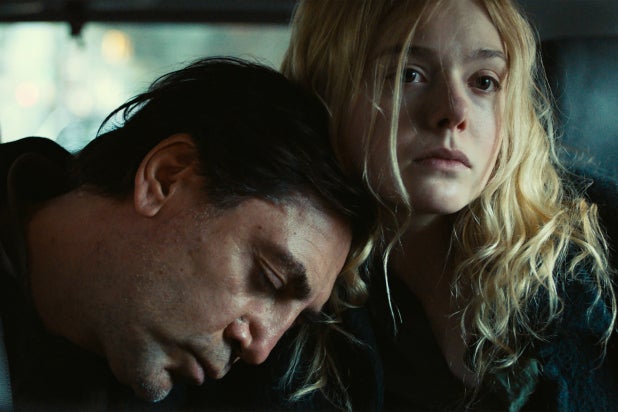 Writer-director Sally Potter opens her tender new drama, “The Roads Not Taken,” in a rather unusual way — with strictly audio on a blank screen. During this time, we hear car horns and other street traffic. As we get comfortable with that familiar chaos, the director brings us to a man lying serenely in bed as the noise from outside filters through his open window.

It is precisely this clash of sounds and spaces that Potter to which continually points us throughout the movie, which begins a virtual screening program on April 10 after its theatrical release was halted because of theater closings due to the coronavirus. Javier Bardem plays Leo, a man suffering from an unknown (and virtually unspoken of) mental illness. He constantly floats in and out of his bustling New York City reality to rural Mexico where he grieves the loss of a child with his partner, Dolores (Salma Hayek). He also drifts over to a vague Greek island where he struggles to find inspiration as a writer. It’s these luscious, affecting transitions — thanks to the impressive sound mixing and Robbie Ryan’s beautiful cinematography — that immediately hooks audiences even before we fully realize what’s going on.

Leo’s daughter, Molly (Elle Fanning), is frustrated on a bus as she hastily makes her way through the hustle and bustle to her dad’s apartment. She’s on the phone with his caretaker, Xenia (Branka Katic, “Captain America: The Winter Soldier”), who tells her he’s not answering the door. He’s also not picking up any of Molly’s phone calls.

After finally arriving at Leo’s home, Molly’s grievance evaporates to give way to a whole new emotion apart from his nebulousness, Xenia’s palpable anxiety, and even her own disquiet: hope. Because today Molly will accompany Leo to his dentist and optometrist appointments, and she is determined to make it a great day.

Potter curiously spends no time spelling out exactly what is ailing Leo. Is it his mind? Is it his body? Bardem gives him a very pensive gait as Molly energetically guides him out of his home and onto the sidewalk. He’s also unable to form sentences or to grasp his surroundings. Maybe it’s his heart? The title alludes to the notion that these gorgeous passages might be formed out of regrets he’s had in his life that he’s never actually experienced.

But that’s not entirely clear in the film, which plants the audience in his point of view, as we know little about Potter’s protagonist and what, if anything, is real. He looks younger and sprightlier in these peripheral narratives, which could easily indicate that they happened in the past. There’s never really a time when we can question him as a reliable character who’s simply reflecting on actual memories, even as the filmmaker redirects our gaze to Molly with him in New York. But maybe that’s Potter’s objective — to evoke compassion from her audience.

Fanning’s portrayal, even with the little information we have about Molly as well, is surprisingly heartrending. Through her touching performance, you can feel Molly’s optimism waver as Leo takes a tumble on the ground on the way to his appointment and struggles to understand what his eye doctor tells him to do. But Molly tries to connect with her father — or, as she calls him, papá — through a shared youthful spirit as she, for instance, does a dance to encourage him to step out of the pants he soiled while in the doctor’s office. For kicks, she buys herself a new pair to wear just like his.

These fluctuations of tone, countered by Molly’s fierce protection of her father, help elevate Potter’s screenplay as she aims to convey a portrait of a man who’s not always living inside our reality. After Molly takes her dad to the emergency room following his fall, she exasperatedly asks why everyone, including his doctors, refers to Leo as if he’s not here. To which his ex-wife and Molly’s mother, Rita (Laura Linney), responds, “Well, is he?”

Bolstered by Bardem’s beautifully layered performance punctuated by faraway smiles and occasional indignance, Leo does seem to be jolted into reality at times, almost like it’s a frightening interruption to his own dreamlike state. Potter’s eloquent editing, with co-editors Emilie Orsini (Potter’s “The Party”) and Jason Rayton, also helps navigate the audience from the fractured state of his mind to what’s going on before him, committing us to his perspective — regardless of whether it’s true.

It makes the film at once a baffling experience and a remarkably delicate one as we, for example, watch an oblivious Leo sail through his day amid insensitive remarks about his mental state and even his nationality. Watching Molly ultimately realize that her dad’s health is way too overwhelming for her is even more crushing.

Though “The Roads Not Taken” is not a perfect film, Potter’s empathy toward her male hero gives him a humanity that few other films have bothered to show, even though most of his dialogue is internal. But Fanning and Bardem deliver two utterly devastating performances that show the power of despair met with unyielding love.