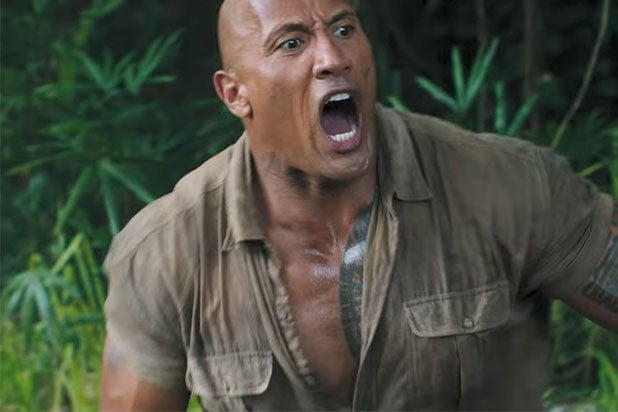 The Rock is taking the art of trash-talking to epic new levels — and it seems that he might be pioneering new concepts in dental hygiene as well.

Wrestler-turned actor The Rock got in a choice dig at his “Jumanji” costar Kevin Hart during a junket for the film, as documented on his Instagram account Monday.

In a video posted on the account, The Rock and Hart engage in a mock scuffle, with Johnson landing a verbal smack-down of monumental proportions.

“‘I’ll knock your teeth so far down your throat, you’ll stick a toothbrush up your ass and brush them, b—-,” The Rock, aka Dwayne Johnson, tells Hart at one point, before giving Hart a one-finger salute and telling him, “Go f— yourself.”

“Our #JUMANJI chemistry is like all three of us having multiple personality disorders,” Johnson captioned the photo.
“Me and @kevinhart4real going at it again, only this time with this added magic sauce of @jackblack.
Jack is my new best friend. [Middle finger] off Hart.”

Lest Johnson find himself amid reports of another cast feud, he added, “Love these jokers. This press junket is already an all timer in terms of fun.”

It also appears to be pretty high up there in terms of graphic imagery.

Watch The Rock cut Hart down to size in the video.

???? Our #JUMANJI chemistry is like all three of us having multiple personality disorders. Me and @kevinhart4real going at it again, only this time with this added magic sauce of @jackblack. Jack is my new best friend. ??-?????off Hart. Love these jokers. This press junket is already an all timer in terms of fun. #JUMANJI #PressJunket #HAWAII ????????