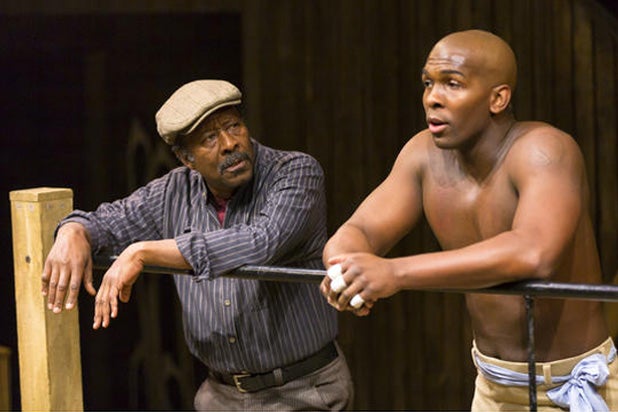 Clarke Peters and Khris Davis in "The Royale"

Marco Ramirez’s “The Royale” is the latest in a recent trend of 90-minute no-intermission plays that suggest what Edith Wharton wrote a century ago in “The Age of Innocence” about life in New York City in the 19th century: “Americans want to get away from amusement even more quickly than they want to get to it.”

Stephen Karam’s “The Humans,” which recently opened on Broadway, uses the compact formula to powerful effect, and does so by creating six full-bodied characters in an hour and a half. Last week, Lucas Knath’s “Red Speedo” opened at the New York Theatre Workshop. It tells the story of an Olympics-bound swimmer who feels he needs to dope to make the team. The play is spare, it’s focused, and ultimately it’s slim because all of the people around the swimmer are types rather than characters.

Now comes “The Royale,” which opened Monday at LCT’s Mitzi Newhouse Theater, and the subject isn’t just an athlete with Olympic potential but the legendary Jack Johnson, who became the first African-American world heavyweight boxing champion. “The Royale” is “inspired” by the Johnson story. His name here has been changed to Jay, but the play’s undeniable power derives from replicating the history of Johnson’s historic match with James J. Jeffries.

No doubt, “Red Speedo” would have had more impact if Knath had made the swimmer a cyclist, given him the name Luther, and said the story was “inspired” by Lance Armstrong. But a central problem would remain: His athlete is caught between his trainer (the good guy) and his brother-lawyer-promoter (the bad guy), and neither of these supporting roles registers as a character. They are devices to push the swimmer’s story. What “Red Speedo” has going for it is Knath’s creation of that hapless athlete, poignantly rendered by Alex Breaux, for whom swimming is the only escape. Instead, it turns into a watery coffin.

In “The Royale,” Khris Davis also delivers in his lead role, and they’re quite a pair of boxing gloves to fill. Jay is super-talented, smart, beautiful, beyond confident. He’s a true Olympian and doesn’t need any medals to prove it. Of course, he wants a medal: the world boxing championship. But it’s 1908 and he’s black. To bring the current champion out of retirement, Jay accepts the 90-10 split in the box office proceeds. He knows he’ll win. He knows this fight isn’t about money. It’s about history. Which, again, is the big advantage “The Royale” has over “Red Speedo.”

Surrounding Davis is a fine cast, but as with the Knath play they haven’t been given characters to play. Jay’s young sparring partner (McKinley Belcher III) represents the future; his trainer (Clarke Peters), the past; and the promoter, as well as a few other white characters (John Lavelle), the racism.

Even though “The Royale” features two big fight scenes, no fight coordinator is credited. That’s because director Rachel Chavkin takes us inside the boxers’ heads, and she is gets an assist from Ramirez’s strongest writing.

There’s another character in “The Royale.” Actually, it’s another symbol: Jay’s family. In addition to making the boxer a larger-than-life hero, Ramirez succeeds in giving Jay mystique. The boxer says he comes from nowhere. He has no past. That’s a clue that late in the play someone is going to show up to tell us all about him. That someone is Nina (Montego Glover), who is Jay’s long-estranged but not forgotten sister. She’s able to do to him what no man has achieved in the ring. She nearly knocks him out. Literally.

That final fight, like the first, is a wonderful coup de theatre, and brilliantly staged. But it’s also comes right after we’ve been introduced to Nina, and Glover can’t make the jump. What actor could? It’s like introducing Stanley to Blanche, and then cutting to the rape scene in “A Streetcar Named Desire.”

Nina’s first scene is overloaded with information, so that her “fight” with Jay at the end, while dazzling to watch, lacks resonance. Jay wins but he doesn’t. It is unlikely Jack Johnson ever had such doubts, and “The Royale” doesn’t convince that Jay does.