The Russo Brothers are returning to the Disney fold — but not with a Marvel project this time. Instead, they’re expanding into the animation realm, with an adaptation of “Superfudge,” one of Judy Blume’s best-selling children’s books.

Produced by the Russo Brothers’ company, AGBO, and written by Amos Vernon and Nunio Randazzo, the Disney+ film was announced to be in development on Monday during the Disney Branded Television portion of the Television Critics Association Winter Tour.

Based on the best-selling book by Judy Blume, first released in 1980, “Superfudge” centers on The Hatcher family. At the heart of that family is 12-year-old Peter Hatcher. He’s living a good life in Manhattan; he’s got his pet turtle, his own room, great parents, and a true best friend, Jimmy. But he also has a 3-year-old brother, named Fudge (well, technically it’s Farley Drexel Hatcher, but Fudge for short). 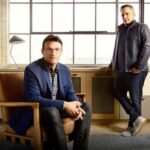 As readers of Blume’s books might remember, Fudge is a chaotic force of nature. In the “Superfudge” movie, we’ll see what happens when Fudge runs away under Peter’s watch. According to Disney, it’ll be “an epic family adventure across NYC” and “one that ultimately brings these two together just as their world is turned upside down by the arrival of a brand-new problem — an infant baby sister — reminding us all that nothing is ever constant … except change.”

“Superfudge” is actually the third book in Blume’s original series, following “Tales of a Fourth Grade Nothing” and “Otherwise Known as Sheila The Great.”

The Russo Brothers’ adaptation also won’t be the first. A television series based on “Superfudge,” the book, ran from 1995–1997. It was simply called “Fudge.”