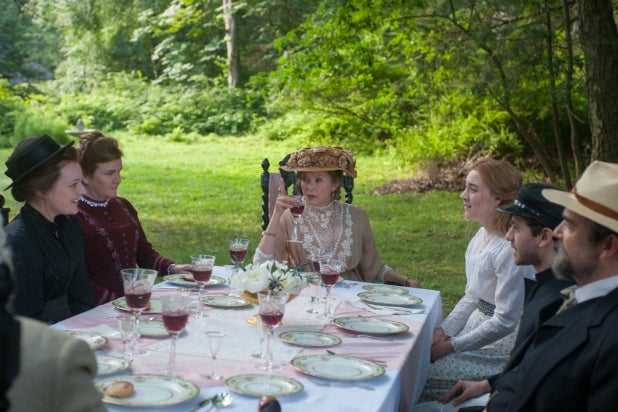 Every part in a Chekhov play, no matter how small, is a great part and filled with potential, and Elisabeth Moss proves that in this new screen version of “The Seagull,” which has been adapted by the playwright Stephen Karam.

Moss plays Masha, which is a small role in relation to the lead roles of the famous actress Arkadina and the ambitious ingénue Nina. At the start of “The Seagull,” Masha famously says, “I’m in mourning for my life,” but Karam cleverly begins his screenplay with the set-up of the last scene in the play and then flashes back to the beginning, when there still seems to be some hope for everyone.

Moss reads that well-known line about being in mourning for her life in a way that exactly catches the tone of Chekhov: deeply anguished yet also somehow comic. Chekhov considered “The Seagull” a comedy and called it that in his text, even though it is filled to the brim with the sadness of what can happen between people who love unrequitedly and compete with each other.

There have been other films of “The Seagull,” and many different contemporary stage productions. Sidney Lumet directed a movie adaptation with Vanessa Redgrave as Nina in 1968, and the 1975 Williamstown production was filmed for PBS with Blythe Danner as a very spontaneous, in-the-moment, and heartbreaking Nina. And anyone who saw Meryl Streep play Arkadina in “The Seagull” in Central Park in 2001 will remember her in it, especially the way she did an expert cartwheel on stage.

Arkadina is played by Annette Bening here, and her celebrated literary lover Trigorin is played by Corey Stoll. In the first scenes, which are presented as a flashback, Arkadina’s son Konstantin (Billy Howle, “On Chesil Beach”) has prepared an avant-garde play starring his girlfriend Nina (Saoirse Ronan), and Arkadina keeps interrupting the performance with rude remarks. Bening plays Arkadina in a much crueler way than she is usually portrayed in this scene; she is very cutting, and yet Bening is believable later when Arkadina wonders, “Why did I hurt him?”

As played by Bening, Arkadina is a vain woman and a ruthless winner who is disgusted by her son’s weakness and pretentiousness and jealousy. In the big scene where Arkadina dresses Konstantin’s head wound after he has attempted suicide, Bening smiles at Howle more like a girlfriend than a mother. Bening’s Arkadina is a woman without a shred of maternal feeling, and this makes her very different from Streep’s Arkadina, who was angry with her son but still tied to him.

Stoll is an extremely sexy Trigorin, especially when he looks at Ronan’s Nina with bedroom eyes as he takes her on a boat ride and rows her along, but the tone of his voice sounds jaded and cruel, and this matches what we have seen and heard of Arkadina. (Never has Bening’s throaty voice sounded more deadly and more heartless than it does here.)

When Bening plays her second big scene, in which Arkadina has to do anything she can think of to hold on to Trigorin, director Michael Mayer keeps the camera steadily on her face as she flatters Trigorin out of his urge to leave her for the younger Nina. After Arkadina has won, Stoll’s Trigorin sits back and says, “I am weak and spineless…is that what women want?” This is a very funny line as delivered here, and it hits just the right tragic-comic note.

Watch Video: Saoirse Ronan Is a Confused Newlywed in the First Trailer for 'On Chesil Beach'

“The Seagull” has been “opened up” so that some scenes play outdoors, and that works well because these characters are supposed to be amidst nature on a country estate. This mobility helps keep the material fluid, as does the very hard-working score by Nico Muhly and Anton Sanko, which becomes particularly ominous before Konstantin’s attempted suicide (what sounds like a mixed male and female chorus starts to shriek on the soundtrack). But the most impressive thing about this film of “The Seagull” is that every role has been ideally cast.

Moss somehow manages to dominate the whole film and stay most in the memory in spite of limited footage, but Bening plays her last moment here extraordinarily well, and this closing scene with Arkadina generally gives actresses trouble. (Streep didn’t seem to know how to play it, as if it were a puzzle that she couldn’t figure out.)

Bening is physically fluttery throughout most of the film, which expresses Arkadina’s desperate need to never face the facts. But in our last view of this woman, Bening decides to keep very still, her eyes glassy and fixed on some distant point, and the effect is like a surprisingly bold move in an otherwise circumspect poker game. The PBS version of “The Seagull” with Blythe Danner is still the best film adaptation of this play, but this movie has much to recommend it.