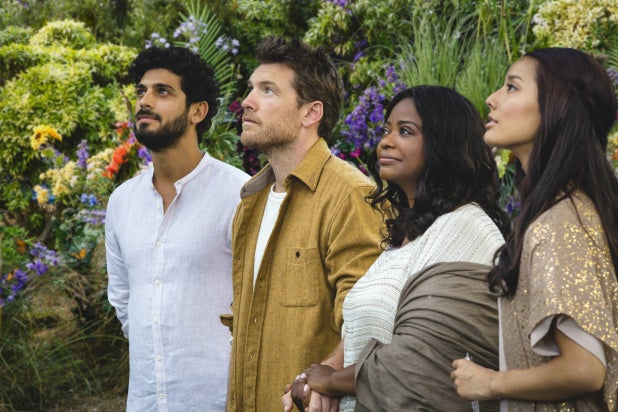 Over 22 million copies have been sold of William P. Young’s novel “The Shack,” which is said to have benefitted from enthusiastic word of mouth among its fans. This film version of Young’s book, which runs an interminable 132 minutes, is an offensively simple-minded, pseudo-religious sham that relies on kitschy imagery to put across its inane message of forgiveness.

Opening narration by lead character Mack Phillips (Sam Worthington) warns that this picture will be “on the fantastic side” and that we might be “skeptical” about what he is about to tell us. This is followed by some brief scenes where we see the young Mack suffering physical abuse from his alcoholic father that is tempered by the appearance of a wise woman (Octavia Spencer) who offers the boy some apple pie.

“Talk to God,” she tells him. “He’s always listening.” We see young Mack pouring strychnine into his father’s liquor, but this scene gets no follow-up.

The subsequent flurry of images from Mack’s adult life are shot by director Stuart Hazeldine in such a fast, scatterbrained way that they feel ridiculously unconvincing, particularly a very confusing sequence where Mack saves one of his children from drowning only to lose another to an unseen abductor. Hazeldine seems completely unable to execute the expected story beats here: Presumably we are supposed to feel Mack’s pain, but the plot has been sketched in so hastily and ineptly that it barely makes any sense.

Yet these too-fast opening scenes are far preferable to what follows. Mack gets a letter from someone called “Papa” that says, “I’ve missed you … I’ll be at the shack next weekend if you want to get together.” Any thoughts that Mack might be having an illicit affair with a man in a love shack are soon put to rest. “Papa,” it turns out, is what his wife Nan (Radha Mitchell) calls God. “It’s too familiar for my taste, but the kids love it,” says the pompously strait-laced Mack.

“The Shack” is the sort of movie in which a character can say, “It’s in the Bible, so it must be true” in all seriousness, and this is also the sort of movie where a woman (played by Alice Braga) can announce, “I am Wisdom,” with a straight face. Mack goes to the shack of the title, which seems to be situated inside a grotesque Thomas Kinkade painting, and once he is there, “The Shack” deteriorates into a series of plodding, soft-spoken conversations between Mack and a trio of deities led by Spencer’s “Papa” God.

Worthington is so rock-like and inexpressive in this movie that his lengthy scenes with Spencer play out like acting classes where she beams at him warmly and tries to get him to display any sort of recognizable human emotion. Conventional Mack wonders why God doesn’t have a “long white beard,” which makes Papa laugh: “I think that’s Santa,” she says. She keeps saying that she’s “especially fond” of Mack, and the joke is supposed to be that this God is “especially fond” of everyone. (Neil Young gets name-checked as an especial special favorite.) But the lame philosophical discussions in “The Shack” are conducted on the most superficial level.

The natural drift of these talk scenes with Papa never move toward the expected tough questions. Is Papa also especially fond of Hitler? Pol Pot? School shooters? The closest Papa comes to acknowledging these questions comes when she says that sometimes she is disappointed in her children like any parent would be, and that’s an awfully cozy way of looking at human evil and what it might mean. “I’m in the middle of everything you perceive to be a mess!” Papa proclaims to Mack at one point, and her words apply equally to the mess of a movie around her.

Papa tells Mack that his dead daughter “lives in a place where there is no impatience…so she doesn’t mind waiting,” but even fans of this book are likely to mind wading through a picture that has an early claim for being worst of the year.