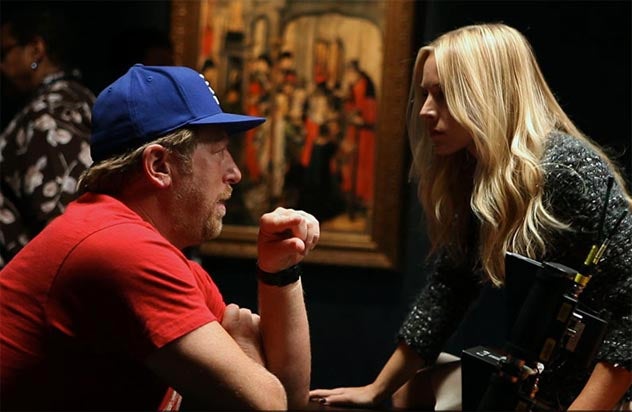 “The Showrunners: The Art of Running a TV Show” is a dream come true for TV fanatics, packed with powerful TV producers sharing insights about what it takes to get and keep a series on the air. J.J. Abrams, “Big Bang Theory’s” Bill Prady, Joss Whedon and “The Good Wife” power duo Michelle and Robert King are among the many contributing to Des Doyle’s documentary, screening at the Arena Theater in Hollywood and available on demand Friday.

“The Showrunners” can be bittersweet — several of the shows tracked are no longer on air — and sags a bit toward the end, but is remarkably generous in spirit. Even those familiar with what a showrunner does will enjoy watching these producers talk about a challenging business where shows can disappear overnight.

It’s a gentle yet entertaining glimpse behind the curtain, with showrunners occasionally opening up about battles with the network suits. Mostly, however, the commentary tends to toward the wry or rueful.

Doyle, who has worked behind-the-scenes in TV, films and commercials, funded his first feature-length project through the Irish Film Board and Kickstarter. A fan of American TV, he starts the documentary by explaining what a showrunner is for the uninitiated, and then takes viewers through the process from script to screen.

“It’s like a controlled plane crash every week,” “Person of Interest” showrunner Jonathan Nolan offers, while Prady calls it “at the same time the best and worst job. You can’t imagine quitting and the same time it’s a job that’s exhausting to the core of your being.”

Showrunners acknowledge it’s not easy to be creative and manage the many elements that go into creating a TV show week after week. Shows have become more cinematic, they note, but are still bound to what schedules that can seem punishing.

“Your ambition is always to make the best episode you can,” former “Lost” showrunner Damon Lindelof offers. “But when you’re writing a script every 10 days, you start to realize every episode is not going to be a home run, he added, and start looking at the seasons as a whole, realizing that the bad episodes will come out in the wash.”

“It seems to not matter how often you can conquer a writing problem,” says Mike Royce, filmed while running “Men of a Certain Age.” “The next time there’s a writing problem that becomes the one that will kill you.”

Showrunners are fairly frank about their network battles. “House of Lies” creator Matthew Carnahan, tracked during preparations for that show’s first season, talks about sparring with FX chief John Landgraf over “Dirt” earlier, for instance, while “Revenge” creator and showrunner Mike Kelley talks about Les Moonves’ note about “Swingtown.” Moonves, he recounts, asked whether the neighbors really had to sleep with each other, a move that would undercut the premise of the show, which was set in the ’70s when certain swinger communities did just that.

Network execs such as Showtime’s David Nevins give their side of the process and actors including Kristen Bell and Ray Romano also make appearances, upon occasion teasing their bosses about being on the other side of the camera for a change.

The documentary tackles hotbutton issues, with showrunners debating how much freedom there is on cable versus network and which type of show is the most difficult.

Regardless when they stand on those issues, most seem to agree about one thing: It’s a very fickle business. It’s hard not to feel Royce’s pain when he learns about “Men of a Certain Age’s” cancellation during the documentary’s production.

“Job security is a punch line in our profession,” Carnahan observes. “We don’t own the whiteboards.”

The casual viewer might not be interested in finding out how the sausage is made, and take the time to watch “The Showrunners.” Those passionate about TV will relish the glimpse inside the writers’ rooms, however staged it sometimes seems.

Diane Garrett, formerly senior editor of TheWrap, has written for the L.A. Times, Variety and Movieline in addition to TheWrap and once served as a fact checker for TV Guide. She began reviewing for an alt-teen monthly shortly after moving to L.A. Nowadays, she's never far from digital devices.
The essential source
for entertainment insiders