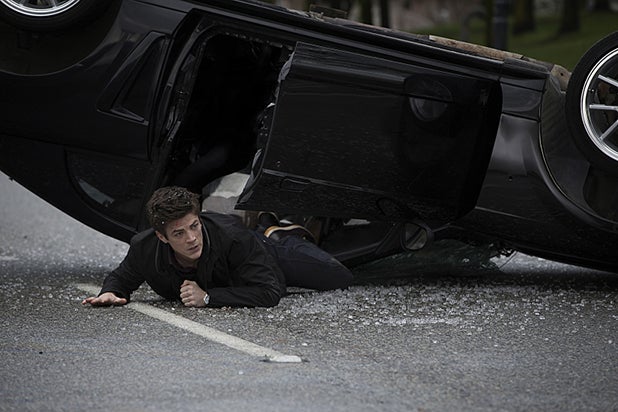 Now he’s got his own show, with his own city to save and his own mysterious past to solve. Becoming the DC superhero known as The Flash, aka the fastest man on earth, following an explosion of a particle accelerator at S.T.A.R. Labs, is just the beginning of the journey for Barry Allen (Grant Gustin).

On the eve of the premiere of “The Flash,” stars Gustin and Tom Cavanaugh, along with showrunners Greg Berlanti and Andrew Kreisberg and DC Chief Creative Officer Geoff Johns, talked to reporters about what to expect in the show’s first season.

“Even though it’s a spinoff, you don’t need to have watched a minute of ‘Arrow’ to enjoy the ‘Flash’ pilot,” said Johns.

“Or to have watched any superhero show, period,” added Kreisberg.

On the docket: How the show will stay true to some elements of its DC comic book roots, while deviating from it in other ways, more teases about the various comic book villains headed for the show, and that big “Arrow”-“Flash” crossover that will bring the heroes of Starling City and Central City together.

Below are five revelations we learned from the stars and showrunners of “The Flash.”

“We always talk about the show as ‘Flash Begins,'” said Kreisberg. “Iris [West] in the comic books is an award-winning journalist. So [on the show] we’re seeing her from the ground up. She’s starting as a blogger, and as the season progresses, we’re going to see her really take journalism to heart. It’s really going to be her beginning. The particle accelerator explosion really changed the course of her life too, and sets her on the path to becoming her ultimate comic book character.”

But others won’t stick so closely to their comic book origins. “There are so many characters that are from the lore, obviously like Caitlin Snow in the comics becomes Killer Frost, and Cisco, who becomes Vibe,” said Johns, referencing the characters played by Danielle Panabaker and Carlos Valdes, respectively, on the show. “I wouldn’t necessarily count on that same track happening.”

2. Barry’s not the only hero in Central City
While most of the people who were inflicted with superpowers by the S.T.A.R. Labs explosion will have villainous intentions towards the city and its people, at least one other person other than Barry will emerge as a potential hero.

And speaking of that…

3. The “Prison Break” reunion was Wentworth Miller‘s idea
Miller had been cast to play DC villain Captain Cold in July, and was instrumental in getting his “Prison Break” on-screen brother Dominic Purcell on board for the role of Heat Wave, a member of Cold’s gang of villains.

“I was on set talking to him and I asked, ‘Hey, if we were going to have you team up with somebody, is there someone you want to work with?'” said Johns. “We talked about the character a bit and he said, Dominic, without missing a beat.”

4. The villain Firestorm will appear sooner than expected
Robbie Amell, cousin of “Arrow” star Stephen Amell and star of last season’s “The Tomorrow People” on The CW, will play a character named Ronnie Raymond, who comic book fans immediately recognized as DC villain Firestorm. So how long will it be before Raymond reveals his fiery alter ego?

“Sooner than I thought, that’s for sure,” added Gustin.

And Raymond will have a bit of a different backstory from his comic book origins. For one thing, on the show, he’s the presumed to be dead fiancee of Panabaker’s Caitlin Snow.

“It wasn’t the grand plan at the beginning,” Kreisberg said. “There was a time when Catilin’s fiancee was not Ronnie. It was just one of those serendipitious things where it all came together. That was what was funny about it, we didn’t even sit down and say, ‘Oh, we should have the comic book villains planning to get married.’ It just sort of worked out that way.”

5. The “Arrow”-“Flash” crossover is called “Flash vs. Arrow”
“You put the winner first!” Kreisberg joked.

In all seriousness, Kreisberg added, the crossover episodes won’t be so much about the gimmick but the characters.

“They really are very important episodes for what Barry’s going through, for what Oliver’s going through,” he promised. “We have one of the biggest surprises for ‘Arrow’ of all time on the ‘Flash’ episode.”

“It was kind of funny having the dynamic back of when I was on ‘Arrow’ a year ago now,” Gustin reminisced. “That was when I met Barry, and he was so fun and awkward and the dynamic between him and Oliver was so fun, and we got to recreate that. But it’s evolved and it’s really very different from anything else on the show.”

On mixing the two show’s very different tones into a cohesive one, the gang also found plenty of levity.

“David Ramsey [who plays Diggle on ‘Arrow] on our show is funnier than he’s ever been,” said Gustin. “It’s because what he’s seeing is blowing his mind, so it’s cool to see those two worlds meet like that.”

“The best part of the ‘Flash’ episode was the almost meta commentary about how serious everyone was on ‘Arrow,'” added Kreisberg. “There’s a lot of jokes at Oliver’s expense on the ‘Flash’ side of it. But what was fun was when we went to go do the ‘Arrow’ side of it, it became the reverse. Barry, Caitlin and Cisco all really like each other and they’re having a lot of fun, but suddenly they’re thrust into a very dark, twisted episode of ‘Arrow,’ and they’re realizing, oh, you guys really are dealing with a lot of serious stuff and you’re playing on a different level.”

Kreisberg also couldn’t help himself from spoiling one funny line which Barry will say to Oliver during the crossover: “When I fight you, it is literally like you’re standing still.”