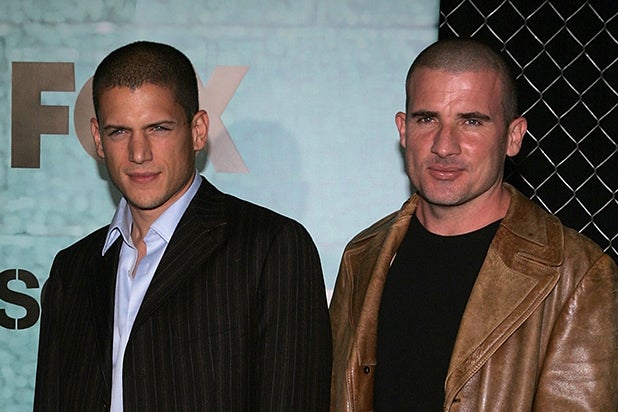 “Prison Break” stars Dominic Purcell and Wentworth Miller are guest starring as villains in a Season 1 episode of the CW’s “The Flash,” an individual with knowledge of the project tells TheWrap. It’s the first time the actors have appeared onscreen together since their Fox prison drama concluded in 2009.

Purcell is set to play Mick Rory, a fire-frenzied bad guy also known as Heat Wave. The DC comics character is a member of a band of villains called the Rogues, which is led by a baddie named Captain Cold.

As TheWrap reported in July, Miller will play Captain Cold, who also goes by the name Leonard Snart. The villain, known for his ruthless cunning, personal discipline, and occasional glimmers of kindness and humanity, has battled the Flash in the DC comics for half a century. Captain Cold’s first appearance on “The Flash” will be in episode four, but the two are also set to start together on episode ten.

Miller and Purcell, who played the oft-incarcerated brothers Lincoln Burrows and Michael Scofield on “Prison Break,” aren’t even the first actors from the popular Fox show to appear in “The Flash” or “Arrow” (the CW show from which it was spun-off.) Robert Knepper, who played the convict T-Bag on “Prison Break,” plays a bad guy named The Clock King on “Arrow” and will soon play the same character on “The Flash.” Peter Stormare, who played John Abruzzi, is set to play Count Vertigo on a Season 3 episode of “Arrow.”

Purcell, who recently starred in Uwe Boll‘s “Assault on Wall Street,” is repped by UTA.

“The Flash” stars Grant Gustin as a forensic detective who gains supernatural speed after being struck by a golden bolt of lightning and winds up becoming the protector of Central City, which is just a hop, skip and a jump away from Starling City where his pal the Green Arrow (Stephen Amell) fights crime Wednesdays on the same network.

The Flash premieres Tuesday, October 7 on The CW.