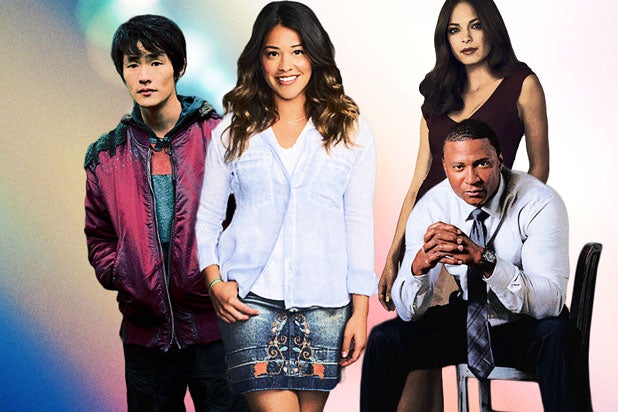 Stars and showrunners of The CW’s new Fall 2014 offerings were eager to discuss the network’s push for diversity at Paleyfest earlier this summer, but according to a new study, the youth-skewing network still under-represents minorities on screen.

The good news is it has improved in some areas. The CW’s 2014-15 offerings are more ethnically-diverse than ever before in the network’s history, but according to new findings, its scripted shows still populate worlds significantly whiter than the audience they are targeting.

The network’s upcoming lineup will feature 89 series regular roles spread over 12 shows, but only 23 of them are non-white characters, according to GLAAD’s “Where We Are on TV” report, which was published Wednesday.

“We’re going to see tremendous changes within the next couple of years, because the time is right,” National Hispanic Media Coalition president and CEO Alex Nogales told TheWrap. “[The networks] all see the same thing — that people of color are 36 percent [of the population]… And they’re saying ‘Are we going to let that audience go to a competitor or are we going to take advantage of it?'”

GLAAD’s 2014-15 study compiled similar data on characters appearing on all of the other major broadcast networks and the CW scored second-lowest of the five. Fox has the most character diversity, with 32 percent of its series regulars listed as ethnic minorities or racially mixed, while ABC and NBC come in second and third (with 30 percent and 28 percent diversity ratings, respectively). In last place, behind the CW, is CBS — only 20 percent of is characters are classified in the “Where We Are on TV” report as minorities.

The CW consistently trails NBC, ABC, CBS and Fox in terms of numbers of nightly viewers — often battling with Spanish-language network Univision for fifth place among the broadcast networks. Since the network tends to reach a smaller, more youthful demographic, it might be fairer to compare its diversity ratings to younger-skewing networks like ABC Family and MTV.

The study is imperfect, of course. It describes characters portrayed on television shows, but not necessarily the backgrounds of the actors cast for the parts. The organization has confirmed its findings with the networks, but results can still be misleading. For example, two characters presumed to be Caucasian on the CW’s “The 100” (Bellamy and Raven) are actually played by actors of mixed ethnicity (half-Filipino actor Bob Morley and half-Latina actress Lindsey Morgan, respectively).

Regardless, the report shows character diversity is up across every major network. Last year GLAAD counted 796 series regulars across the five broadcast networks’ scripted offerings and identified 183 of them as characters of color (22.9 percent). This year, the study registered 222 characters of color out of 812 (27.3 percent).

On the low end of the spectrum are two CW series featuring exclusively white main characters. “Supernatural,” one of the network’s most highly-rated shows (averaging around 2.19 million viewers per episode last season), stars Jared Padalecki and Jensen Ackles as two Caucasian demon-hunting brothers. The show also lists Misha Collins and newly anointed regular Mark Sheppard as series regulars. The -created supernatural drama begins its 10th Season on Oct. 7, but has yet to make any non-white characters series regulars.

“Reign” is the other CW series that lists zero non-white regular characters, but considering it’s set in a 16th Century French high court, it may have history itself as a built-in excuse. However, the show does fare much better along another important demographic split: five of its eight series regular characters are female, making “Reign” the network’s second most female-centric offering.

Here’s a show-by-show chart of what the network has to offer:

How the CW compares to the real world
As encouraging as the network’s overall character diversification might be, the CW still lags behind the nation’s rapidly evolving landscape. According to U.S. Census data from 2010, 63.7 percent of Americans identified as non-Latino whites.

Furthermore, the disparity between the ethnic composition of the CW’s characters and its target demographic — 18 to 34 year olds — is higher still. Forty percent of Americans in that age range identify as ethnic minorities, according to Statisa.com, which is further proof the CW’s target audience is watching fictional worlds that do not yet quite mirror their own.

And that’s nothing new.

It’s not just quantity, it’s quality
“When I was a kid, the only Latino characters you saw were crooks — they were the bandits and everything else. So the image of yourself is not a very good one,” said Nogales. “We’re a society that consumes a great deal of media. If all you see are negative stereotypes, they bring you down because you kind of feel they’re making you feel like less.”

To that end, The CW has made inroads, especially this year. Its two new Fall 2014 offerings, “The Flash” and “Jane the Virgin,” have been heralded for not only their diversity, but in how the characters are portrayed.

Rising Latina star Gina Rodriguez is the centerpiece of “Jane the Virgin,” which is adapted from a Venezuelan telenovela and features an almost entirely Latino cast of characters.

“Advertisers are always out there asking, how can we speak to the Latino audience, how can we get them to buy our products, because it’s a 50-plus million demographic,” said Rodriguez at Paleyfest earlier this month. “The truth is you talk to them like everyone else, tell human stories.”

Nogales agreed. “Seeing ourselves portrayed in media has a great deal of merit because it offers us a window into what those characters are seeing and how they’re dealing with it,” he told TheWrap. “It gives you a soundness of mind you can grow up with.”

Affecting positive change across mediums
Meanwhile, “The Flash” stars Grant Gustin as superspeedster Barry Allen. His charater is white — as are most TV and movie superheroes — but he surrounds himself with a diverse cast of allies. The group includes Joe and Iris West, two black characters who serve as Barry’s surrogate family, and a Latino mechanical engineering genius (played by Carlos Valdes) who aids the Flash from S.T.A.R. Labs. It’s worth noting Joe and his daughter Iris (played by African-American actors  and Candice Patton) are actually based off of white characters in the DC comic books.

Perhaps the network and showrunners both deserve extra credit for race-bending the Wests in a more diverse direction, especially since executive producers Andrew Kreisberg and  hinted at Paleyfest that Wally West — aka Kid Flash — might eventually join the series.

The show has yet to air, but the casting choice has already affected DC Comics properties in other mediums. The company’s chief creative officer has been a close collaborator with the showrunners since “The Flash’s” inception, and as a result was instrumental in Kid Flash undergoing a similar transformation in the comics.

Where the CW falls flat
The data further shows the CW is sorely lacking in lesbian, gay, bisexual or transgender characters. According to the GLAAD report, zero of the network’s 89 regular stars portray LGBT actors. That number is down from last year, which saw three openly LGBT characters in the CW’s spotlight. Two were featured on “The Carrie Diaries,” which was canceled after a low-rated Season 2, and one was on “Star-Crossed,” which lasted only one season.

“Arrow” has Sara Lance and Katrina Law’s Nyssa Al Ghul as bisexual characters, but both are recurring and not series regulars.

An optimistic outlook for an even more diverse future is well within reach
Nogales pointed out true on camera diversity might be obtained even quicker if networks, production companies and agencies would make a conscious effort to employ a diverse staff of writers, executives and talent representatives.

“It’s very encouraging,” he said of the growing number of non-white writers working on major network series. “Sooner or later those writers working on television will become show creators and by osmosis they will bring their own culture to bear in whatever they write.”

The CW declined to comment or participate in this story.