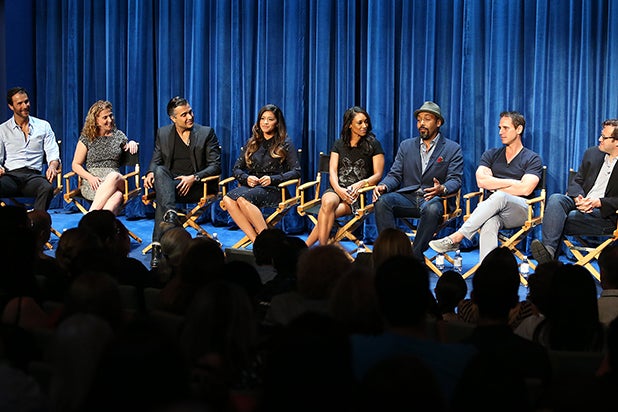 The CW’s newest Fall offerings are more diverse than ever thanks to “Jane the Virgin” and “The Flash.” Following screenings of the pilot episodes, the shows’ cast and showrunners gathered for a panel at Paley Center Saturday and spoke candidly about the significance of the network’s diversification and how they hoped to be role models for young viewers.

“Advertisers are always out there asking, how can we speak to the Latino audience, how can we get them to buy our products, because it’s a 50 plus million demographic,” said “Jane the Virgin” star Gina Rodriguez during the panel. “The truth is you talk to them like everyone else, tell human stories.”

When Rodriquez was asked why she declined a role on Lifetime’s Marc Cherry drama “Devious Maids,” she said she preferred to play characters who spoke to her — like Jane.

The CW show — based off a Venezuelan telenovela — features a primarily Latino cast, but Rodriguez believes its themes are universal.

“We just want to be at the same party as everyone else,” she said. “You don’t have to be Latino [to enjoy the show]. You just have to have a heart and a mind and want to explore and adventure because I think this show’s for everyone. It just happens to be told by a little brown girl.”

On “The Flash,” a spinoff from the network’s other successful superhero show “Arrow,” super-speedster Barry Allen is played by Grant Gustin, but Barry’s surrogate family on the show are Joe and Iris West (played by Jesse L. Martin and Candice Patton, respectively), an African American family who took him in when his mother was killed and his dad was sent to jail.

The Wests are white in the comics, but showrunners Andrew Kreisberg and Greg Berlanti revealed it was a deliberate choice to change that for the show.

“You want to go to a place where you work everyday where you get to tell stories that look and feel like the audience in America that are watching,” said Berlanti.

When asked by a fan, the producers didn’t rule out the possibility of the show adding a second Flash — a Black one — to its ranks. Wally West, the DC superhero known as Kid Flash, is related to the West family in comic book lore, and Kreisberg revealed the character had a lot to do with their decision to change the race of Joe and Iris. “We made the West characters African American so we can eventually head in that direction, absolutely,” he said.

It’s a decision that’s gone beyond race-bending the character in one medium. Because DC’s Chief Creative Officer Geoff Johns has been a close collaborator with the showrunners since the show’s inception, Wally West’s race went through the change when DC Comics relaunched their continuity with The New 52.

As TheWrap previously reported, ABC is also focused on more diversified programming this fall. A recent Nielsen study showed black and Hispanic audiences were watching proportionally more traditional TV than they had before. If those viewers are anything like Rodriquez, they’ll be looking to see themselves represented on the screen, too, and it seems networks are finally catching on.