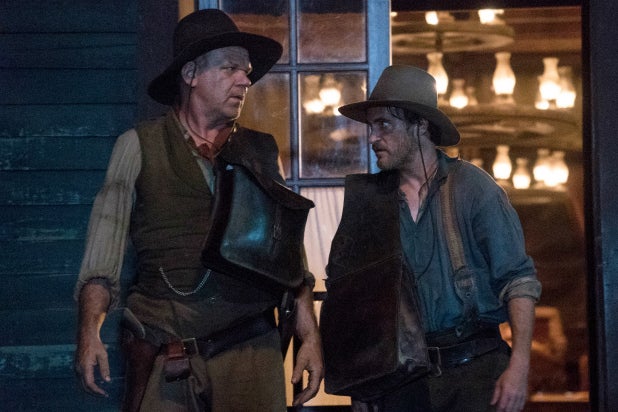 “The Sisters Brothers” gallops on screen with a lot of ambitions, and it fulfills them all. It’s a sprawling Western that’s also an intimate character piece; it has moments of wit but also devastating tragedy; it delves into larger themes like the impact of fathers upon sons, and how greed and industrialization lead to environmental devastation, and yet it offers the hope of redemption.

In the pantheon of English-language debuts from international filmmakers — it’s directed by Jacques Audiard, the Frenchman behind “A Prophet,” “Rust and Bone,” “Dheepan” and “The Beat My Heart Skipped” — it’s a notable one. And it’s also a reminder that while the Western may never regain the massive cinematic popularity it once enjoyed, it’s also a genre that will never die so long as talented artists still find ways to use it to tell new and interesting stories.

It’s got all the wide-open spaces you expect when a European shoots on U.S. soil for the first time, and enough shootouts and campfires and horses and prairies to satisfy purists, but Audiard and co-writer Thomas Bidegain (“Racer and the Jailbird”), adapting the novel by Patrick Dewitt, include plenty of psychological complexity and deadpan humor in the mix. This is a Western for people who think they don’t like Westerns, but it’s also for fans of John Ford and Budd Boetticher alike.

The eponymous brothers — Joaquin Phoenix is Charlie, John C. Reilly is Eli — are killers-for-hire working for the powerful Commodore (Rutger Hauer) in the mostly untamed Oregon in the early 1870s. We see their first gunfight from a distance, sparks of gunfire lighting up an otherwise pitch-black night. The Commodore promotes Charlie to “lead man” of the two, but despite his bravado, we soon learn that Eli is the smarter of the two, not to mention the kinder and more conscientious. Hot-headed Charlie is fearless but, like their hated father, he drinks too much.

The Commodore sends them off to rendezvous with another in his employ, John Morris (Jake Gyllenhaal), who has been sent to track down one Hermann Kermit Worm (Riz Ahmed), who has supposedly taken something of great value from the Commodore. Morris is to let the Sisters know of Worm’s location and then hand him over to be killed.

Nothing goes according to plan, of course, and the true intentions of both Worm and the Commodore throw the entire mission into question. Eli yearns to give up this life, while Charlie can imagine no other. Worm dreams of establishing a utopian commune, but when he mentions he wants to build it in Dallas, we know his ambitions are as doomed as Eli’s horse, who gets mauled by a bear.

Juggling all the tones and ideas of “The Sisters Brothers” is no easy feat, but Audiard and Bidegain manage it with the help of this talented central quartet of actors. Usually a top-billed marquee attraction, Gyllenhaal takes a secondary role here, and while all four are engaging and empathetic, it’s Reilly who’s the standout here. Perhaps no role since “Magnolia” has allowed him to simultaneously display both his comic and dramatic chops, and he takes a character who at first seems like an oafish sidekick and makes him achingly human and unforgettable.

(Among the supporting players, we get some satisfying scene-stealing from greats Carol Kane and Allison Tolman, the latter playing a saloon girl who’s stunned by Eli’s sweetness when he requests, essentially, the Girlfriend Experience.)

Composer Alexandre Desplat does some of his best work here; it’s challenging for any film scorer to summon the spirit of the West without aping Elmer Bernstein or Ennio Morricone, but his grasp of the material never wavers into pastiche. And while cinematographer Benoît Debie (“Spring Breakers”) clearly revels in the rolling clouds and the expanse of snowy mountain peaks, he too serves the genre while always prioritizing how the characters are framed within this glorious setting.

We seem to be in a resurgence of films that are satisfyingly old-fashioned in the best sense; movies like “Crazy Rich Asians,” “First Man” and “A Star Is Born,” that keep the craft and the pleasure of studio-era Hollywood and imbue them with contemporary ideas and artistry.

Add to their company “The Sisters Brothers,” a film that delivers what we want from a Western without being afraid to ask hard questions about the men who made the Old West — the ethics of the rich and powerful, and the consciences of those who followed (or defied) their bidding. The title promises a goofy lark, but this is one of the year’s best films.