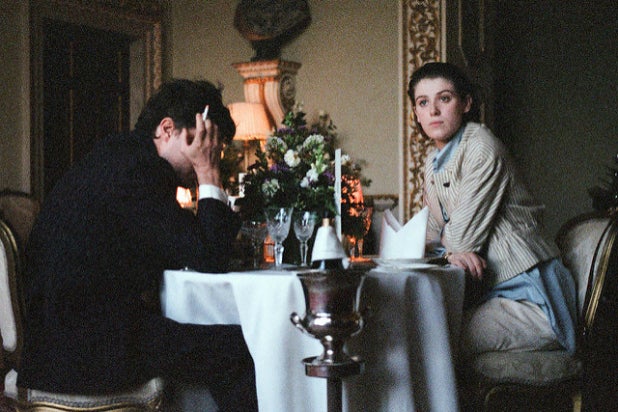 In British auteur Joanna Hogg’s exquisitely composed fourth feature “The Souvenir” — winner of the Grand Jury Prize in the World Cinema Dramatic competition — a beguiling layer of innocence surrounds its central character, Julie. It’s a sweet, translucent shell actor Honor Swinton-Byrne (Tilda Swinton’s daughter, terrific) almost can’t help but wear on behalf of the 20-something Londoner she plays, while she teeters on the brink of breaking out of it.

Seen from the other side of one’s mid-40s, it’s a recognizable shield of youthfulness, one that rips open and vanishes when you least expect it to. In Julie’s case, immense, life-defining endeavors have already been chipping away at it. She has been feeling her way through film school with ambition, searching for her creative voice in the 1980s and trying humbly to reconcile her socioeconomic privilege with her lefty worldview and artistic interests.

But it’s the kind of tragic, life-altering romance she’s about to launch into that will eventually dissolve it. The kind of romance that brings home the clichéd but painfully true phrase, “what doesn’t kill you makes you stronger.” Almost everyone has a deeply private secret about that one affair you wish you hadn’t embarked upon, but made you who you are today all the same.

This is all a long-winded way of saying: “The Souvenir,” among other things, is a coming-of-age tale for grownups who still keep the essence of their formative years in a cigar box somewhere. And this long, drawn-out sketch isn’t entirely out of step with Hogg’s approach to bringing Julie to life, as “The Souvenir” is all in the patient, repetitive details.

Writer-director Hogg incrementally trickles them into her story at such a leisurely pace that you might get thrown off at first, especially if you are not familiar with her previous works like “Exhibition” and “Archipelago,” which crack open mundane domestic rhythms with a similar unhurriedness. But rest assured, Hogg is several steps ahead of the audience here, just like she was in the two aforementioned films; she makes sure that Julie’s world materializes and clicks into place in the eyes of the audience at a time she dictates.

In that, when Julie is deep into her dysfunctional, increasingly toxic relationship with heroin addict Anthony (Tom Burke, nailing the arrogance that coats his character’s irreparable vulnerability), we are there with her, too, in every sense of the word. So much that it actually feels like we’ve always been residing within Julie’s susceptible soul, inside her vertically narrow (and typically English) two-story Knightsbridge apartment and sitting around her dining table, awkwardly placed bang in the middle of a cozy living room, lit by a small window. It’s a smallish but posh space, undoubtedly financed by her wealthy parents who reside in the country.

The ever-elegant Tilda Swinton plays her own daughter’s screen mother with grace (it clearly runs in the family), portraying a helpful parent who occasionally drops in to offer a hand with random tasks and lend the money Julie needs for film equipment in support of her documentary project that focuses on the working-class city of Sunderland.

We learn more and more about Julie through hazy, boozy evenings where art and politics are discussed among free-spirited youngsters, in a collection of scenes that call to mind a non-satirical, more bohemian “Metropolitan.” It gradually becomes easier for us to see why our wide-eyed, motivated film student falls for the pompous, outspoken and admittedly seductive Anthony when no one else is looking. Grandly dressed in preppy suits and military-style overcoats and holding a position at the Foreign Office, Anthony comes loaded with opinions on Powell & Pressburger and art, and majestic romantic gestures that involve buying her expensive lingerie, taking her to museums and whisking her to extravagant trips to Venice.

The duo’s unlikely union makes sense to no one — in one uncomfortably hilarious, interventional scene, a friend throws Julie off by flat-out questioning her relationship with an addict. But the blinded Julie keeps at it, ignoring the signs and worse, forgiving various unforgivable missteps along the way until the inevitable happens.

Julie is a fictionalized version of Hogg. “The Souvenir” isn’t exactly autobiographical, but it shares a DNA with the filmmaker’s own past as a film student. It is a precise yet dreamy memory piece, in an opposite but equally masterful manner to Alfonso Cuarón’s “Roma,” also a cinematic reenactment of recollections. If “Roma” feels like encountering someone’s crisp and objective remembrances as an invisible, respectably distant ghost, “The Souvenir” — with its soft pastels, grainy textures and cloudy aftertaste — feels like getting liquefied within them.

Through soft lighting, enviable costumes (by Grace Snell) and meticulous furniture choices, Hogg sculpts her memories with remarkable exactness throughout. David Raedeker’s cinematography stylishly caresses her vision frame by frame, both when Hogg places bodies and items in objective, painterly shots and chooses to zero in on the details; like the train of an elegant gown sweeping a stately staircase. The result is the best kind of fine art: heartbreaking, sophisticated and deeply cinematic all at once.