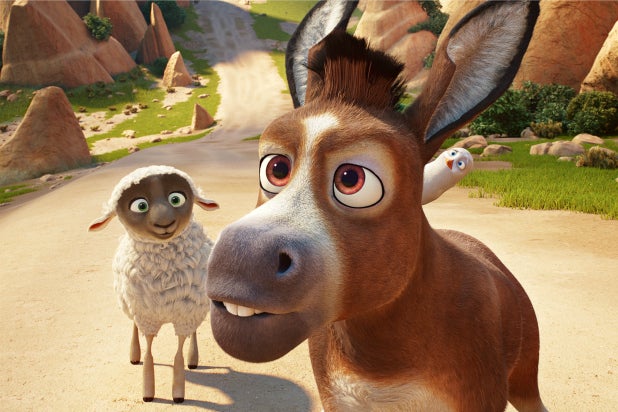 The first Christmas has always been something of a challenge for big-screen treatments. Treated too reverently, there’s not enough drama to make the birth of Jesus all that interesting. (I’m zero-for-two at staying awake through the well-intentioned “The Nativity Story.”) Filmmakers who tweak the material, on the other hand, can expect the kind of placard-waving protestors that greeted the U.S. premieres of “Monty Python’s The Life of Brian” or Jean-Luc Godard’s “Hail, Mary.”

So now we get “The Star,” which attempts to retell the Nativity story through the eyes of some sassy talking barnyard animals, and the results are an uncomfortable mixture of sanctimony and silliness. One senses director Timothy Reckart and screenwriter Carlos Kotkin (“Rio 2”) trying to split the difference between Sunday school and the Cartoon Network, but the results meet the standards of neither.

The youngest of viewers won’t mind the transitions from poop jokes to angelic visitations, but their parents will be forgiven for finding the proceedings erratic when they’re not just plain dull. Even at 86 minutes, “The Star” often feels like it’s taking the long way around to its destination of the Bethlehem stable.

We open (the film’s most solid gag is the title card that tells us its “Nine Months B.C.”) on a wide-eyed mouse (voiced by Kristin Chenoweth) bounding into the home of young Mary (Gina Rodriguez), who shares a scrap of her bread with the rodent. Before either can eat, however, the shiny outline of Gabriel appears to tell Mary that she’s going to bear the Messiah, news that the teen takes relatively in stride.

Meanwhile, in a barn across town, a donkey (Steven Yeun, “The Walking Dead”) walks in a circle grinding down grain but dreams of one day marching among kings with his best pal, Dave the dove (Keegan-Michael Key), flying overhead.

The donkey injures himself while escaping from the miller who owns him, and it’s newlywed Mary who tends to the ass (and names him “Bo”) over the objections of her husband, Joseph (Zachary Levi). Joseph, for his part, is a bit gobsmacked to discover that his new wife is not only pregnant but also carrying the son of God, but the Lord quickly talks him off the ledge.

When the Magi show up early with gifts and tip off Herod (Christopher Plummer) that there’s a new king in town, he sends out an assassin (leading vicious dogs voiced by Ving Rhames and Gabriel Iglesias) to find and kill the baby. So it’s up to Bo and Dave and their sheep pal Ruth (Aidy Bryant) to save the day as Mary and Joseph travel to Nazareth to participate in Herod’s census.

If the jokes were smarter or the spirituality subtler, there’s no reason why this amalgam couldn’t work. The various animals are, after all, baked into the story, and the notion of them communicating with each other was already the basis of a 1970 TV special, “The Night the Animals Talked.”

But “The Star” puts us through the basic plot beats of most kid’s movies (believing in yourself and dreaming big are major themes here) while throwing in Biblical messages with an ungainly thump. (When all seems lost, Bo looks skyward with his big eyes and says, “I guess I could try…praying?” A better spin on the line might have been, “Are you there, God? It’s me, donkey.”)

The all-star vocal cast is a very mixed bag, with Bryant’s sincere eccentricity making the most impact. The bad guys are bad, the wise-crackers are snappy, and Oprah Winfrey (as a camel) gets assigned the most unctuous lines about the impending birth of the Christ child.

And as if the dialogue weren’t heavy-handed enough, the song choices tend to be quite on the nose — you can pretty much guess where “Mary, Did You Know?” is going to turn up.

As an animated feature, “The Star” isn’t much to look at; the character design is fairly personality-free and the Biblical locations don’t pop with specificity or artistry. Linus Van Pelt tells this same story with far more heart in “A Charlie Brown Christmas,” and he wraps it up in less than two minutes.