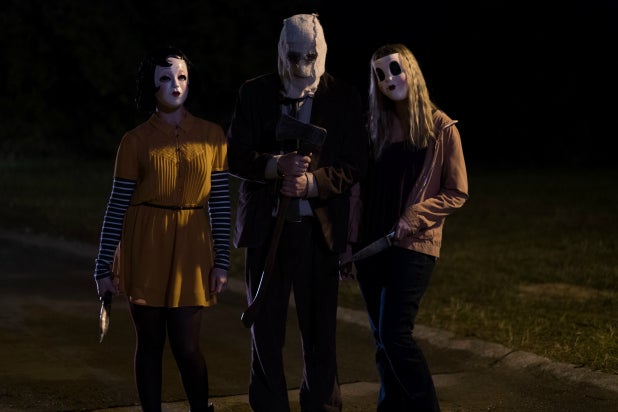 Writer-director Bryan Bertino’s thriller “The Strangers” premiered in 2008, and it has taken 10 years to get this sequel, subtitled “Prey at Night,” on screen. Bertino is a co-writer this time (with Ben Ketai) for director Johannes Roberts (“47 Meters Down”), who starts out this second film rather slowly but eventually takes some advantage of his opportunity here.

The first film had Liv Tyler and Scott Speedman terrorized by masked assailants at an isolated summer home in the country, and Bertino highlighted the randomness of their ordeal. (He has said that he was inspired by coverage of the Manson Family murders.) “The Strangers” was stranded somewhere between the theoretical pretensions of Michael Haneke’s “Funny Games” and the lower grade horror clichés.

“The Strangers: Prey at Night” begins with the title “Based on true events,” which invites a derisive chuckle from wised-up horror audiences. We hear a pop song on the soundtrack, and a car with three passengers inside drives up to a trailer. (The song stops on the line, “You know life is cruel,” just so we don’t miss the point.) An older woman goes to see what the noise is outside, and it is made clear she is not long for this world.

The film then takes pains to set up a family story with characters that we might care about. Angst-filled teenager Kinsey (Bailee Madison) has been behaving badly, and so her parents Cindy (Christina Hendricks) and Mike (Martin Henderson, “Grey’s Anatomy”) are sending her away to a boarding school, even though they can’t afford it. Kinsey feels that her parents favor her older brother Luke (Lewis Pullman, “Battle of the Sexes”), and so tensions simmer as they all pile into a car to visit relatives.

Roberts indulges in some slow zooms as the family set themselves up in a trailer for the night, and we see the bond between Luke and Kinsey, who wears a Ramones shirt but barely knows how to smoke cigarettes. They discover the word “Hello” written many times in red all over a window in the trailer park, and a girl keeps coming to the door of their own trailer to ask, “Is Tamara here?” Once Luke and Kinsey discover the dead bodies of the older couple from the first scene — which turn out to be the remains of the relatives they were visiting — things escalate predictably as the family are all assailed by masked slashers.

“The Strangers: Prey at Night” is the sort of modern horror movie that shows us a shot of smashed cell phones as a kind of ultimate violation. The family is menaced unexcitingly until Roberts decides to make this movie into 1980s Power Ballad Horror. Luke has defended his sister but has been unable to bring himself to use a gun. Suddenly he stumbles into a pool area, and a bunch of electric lights shaped like trees get switched on. The old Bonnie Tyler hit “Total Eclipse of the Heart” starts to play on the soundtrack, and Luke stands up for himself against a man in a mask, who comes swinging at him with an axe.

Roberts builds this sequence so that it feels almost De Palma-esque, or at least skirting that stylized territory. The way that Luke and the slasher fall into the pool and do battle there while “Total Eclipse of the Heart” keeps playing as background has a kind of tension and dynamism that is sorely lacking in the humdrum nighttime trailer-park scenes that have preceded it.

Roberts keeps this Power Ballad Horror thing going when Kinsey finds herself chased by the same slasher while “Making Love Out of Nothing At All” plays on the soundtrack. At one point, as the danger to Kinsey seems to reach an end, Roberts has that pop song from Air Supply start to distort slightly, a good idea that he milks for all it is worth.

“The Strangers: Prey at Night” is a lean 85 minutes, but the last third with these pop-song-horror set pieces plays so much better than the first half that it suggests that Roberts should have abandoned all caution and really gone for a more consistently over-the-top film based in the emotion that he clearly wants to foster. As it is, this is only half a good horror movie.