TheWrap magazine: ”The higher we go, the less dialogue we have,“ says director Patrick Imbert of his mountaineering tale

This story about “The Summit of the Gods” first appeared in the special animation section in the Awards Preview issue of TheWrap’s awards magazine.

Based on the manga by Jirô Taniguchi and Baku Yumemakura, the breathtaking French-language animated feature “The Summit of the Gods” searches for meaning at inhospitable heights. The drama set in the 1990s chronicles two quests, one of headstrong climber Habu (voiced by Eric Herson-Macarel) bent on conquering Mount Everest alone, and one involving photojournalist Fukamachi (Damien Boisseau) seeking grandeur by potentially finding a camera that belonged to George Mallory, the real-life mountaineer who disappeared in 1953 while attempting to climb the same peak. Inevitably, their paths overlap.

Director Patrick Imbert wasn’t familiar with the material until renowned producers Damien Brunner and Didier Brunner at Folivari approached him. He immediately appreciated the story’s potential for animation and began sorting through the passages to adapt it for the screen alongside co-writer Magali Pouzol.

For Imbert, who co-directed the hand-drawn triptych “The Big Bad Fox and Other Tales” and served as animation director on titles such as “Ernest & Celestine” and “April and the Extraordinary World,” this adult-oriented mountain climbing saga offered a chance to embrace an aesthetic closer to his personal taste, which is grounded in realism. 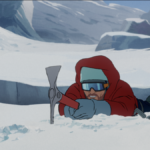 Also Read:
‘The Summit of the Gods’ Film Review: Breathtaking Mountain-Climbing Story Captured as Only Animation Can

“The style is very sober because I want the audiences to feel and remember the emotions of the story, not the character design,” Imbert said. “We achieved this through the compositions, the light, and the compositing part of the process. With all these tools we created strong sensorial impressions.”

Because the painterly backgrounds are based on existing locations, such as Tokyo, Kathmandu, and the Alps, he relied on the photographic documentation available for reference. “We also had to draw in a lot of details in the frame in order to show the scale between the minuscule humans and the enormous mountains,” he added.

In addition to researching the history of this extreme sport and listening to testimonies of real mountaineers, Imbert’s team included two consultants who were climbers. One was a “summiter,” a title given to those who reach the zenith on Everest, and another came to the studio with equipment to show them the knots and how to use rope in an accident. The exhaustive attention to detail reinforced the notion of the human desire to discover and push boundaries.

“The main intention wasn’t to make a documentary about mountaineering,” Imbert said. “Mountaineering is just the context of the movie, but not the main theme. Maybe such a story could happen in the sea with sailors. It’s about the search for the absolute.” 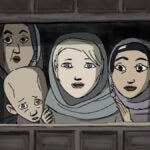 With the score by Amine Bouhafa, the director wished to both emphasize the poignancy of certain scenes via what he calls “Hollywood-style music,” and conjure up a spiritual atmosphere, almost as if the landscape itself was given a voice to communicate.

“Little by little, the composer helped me be more precise in the meaning of each scene,” he said. “The movie is built on a progression. The higher we go, the less dialogue we have. When the two guys are climbing, they are doing a lot of physical effort, so they cannot talk. That’s the time for the mountain itself to talk through the music and sound design.”