The series is set to premiere with all 10 episodes on Peacock Jan. 12, and will feature 20 contestants who are battling it out through a series of psychological challenges to see who takes home $250,000. “The catch? Three of the contestants coined ‘the traitors’ will devise a plan to steal the prize from the other contestants coined ‘the faithful,’ reads a description of the series. 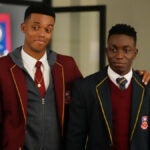 Also Read:
‘Bel-Air’ Season 2 Teaser: Will Sets Out to Make His Own Decisions (Video)

In the trailer, contestants are seen going at it as they discuss who their skepticisms of one another and who they’d like to see banished from the competition.

“You’re going to confront her, when you’re saying her name all day,” says Brandi Glanville (“The Real Housewives of Beverly Hills”). “I think you’re a traitor, I think you’re traitor,” Glanville says in another scene from the trailer.

“Either banish me, or murder me. I’m done,” says Kate Chastain (“Below Deck”).