Aaron Sorkin’s “The Trial of the Chicago 7” is loaded with moments that will make you laugh, cheer or be outraged. But one of the film’s most alarming moments comes when Bobby Seale, the Black Panther party leader as portrayed by Yahya Abdul-Mateen II, is ordered bound and gagged in his courtroom seat by judge Julius Hoffman.

The scene is a horrifying moment of racial injustice and prejudice that finally boiled over after numerous scenes of Seale being denied his rights, representation and more. It’s such an outrageous sight in a movie that prides itself on its accuracy that it begs the question, was Seale really bound and gagged in the way the movie suggests?

The truth is, yes, Seale was tied to his chair and gagged in full view of the jury, and it was as bad, if not worse, than Sorkin’s dramatized version.

“The Trial of the Chicago 7” depicts the courtroom drama that followed the violent riots at the 1968 Democratic National Convention in Chicago. Though the title refers to the “Chicago 7,” Seale was the eighth man, along with David Dellinger, Rennie Davis, Thomas Hayden, Abbie Hoffman, Jerry Rubin, Lee Weiner and John Froines, who was charged with conspiracy to cross state lines with intent to cause a riot. Seale’s case however was eventually severed from the Chicago 8 on November 5 not long after he was in fact ordered bound and gagged for his repeated outbursts in the courtroom.

The movie explains that though Seale was included in the pool of defendants, he had traveled to Chicago only briefly as a last minute replacement for his companion Eldridge Cleaver to speak at the demonstrations in Chicago and had not even met the others prior to the trial. And his lawyer, Charles Garry, was in the hospital for gallbladder surgery during the trial, leaving Seale without legal representation.

That all gels with the history, and according to the Constitutional Rights Foundation, Seale repeatedly interrupted the court proceedings and demanded to represent himself, make an opening statement or cross-examine witnesses who had testified against him, requests that Judge Hoffman repeatedly denied, claiming that Seale was already represented by William Kuntsler (Mark Rylance in the film).

Also Read: 'The Trial of the Chicago 7' Fact Check: Was 'The Whole World Is Watching' A Real Slogan?

Sorkin does however toy with the chronology for dramatic effect. In “Trial of the Chicago 7,” Seale learns that his Black Panther associate Fred Hampton has been murdered, leading him to give an impassioned speech in court and telling Judge Hoffman to “strongly f— yourself.” 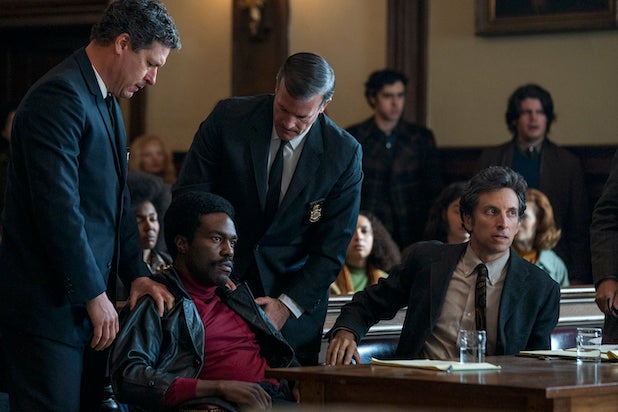 While transcripts from the actual courtroom (via Slate) don’t indicate Seale ever said those words, he did call Hoffman “a bigot, a racist, and a fascist,” and Hoffman did tell guards in the courtroom to “deal with him as he should be dealt with,” as Frank Langella’s Hoffman says in the film. Hampton also wasn’t murdered until December 1969, whereas Seale was first bound and gagged in the courtroom on October 29.

The movie too suggests that Seale was perhaps only bound briefly or during a single day of the court proceedings. In truth, he appeared in court for several days tied to his chair in full view of the jury, unable to speak beyond muffled noises, until Kuntsler declared, “This is no longer a court of order, Your Honor, this is a medieval torture chamber.”

Seale himself described in detail in an interview with Democracy Now just how much of an ordeal it was. He described his head being wrapped so only his eyes and nose were visible while his legs were tied with bandages. On the final day he was gagged, he said he began losing blood pressure and circulation to his arms and was carried out of the courtroom by the guards.

“They tried to pick me up in this heavy chair, three guards. And the big guard started beating me in the head. Jerry Rubin jumped up out of his hair. Abbie jumped up out of their chair, trying to help me. Guards slammed them back in their chair. I’m trying to turn my hand over, my right hand over, to get my — to get my fingers up to the top of the gag. And then the other guard would turn my hand down and then hit me and knock me back, you know, and stuff like that. They really brutalized me.

The real Bobby Seale then described a scene that incredibly does not make the film in which a guard’s elbow in the commotion hit Seale in his testicles, causing him to yell out in the courtroom, “You hit me in my balls, MF!” And he added that all of his frequent outbursts and demands to get the case delayed were all part of his legal strategy.

The Library of Congress even has a startling drawing — one of many from inside the courtroom — that shows Seale strapped to his courtroom chair. You can see it here.

Though Seale’s case was finally severed after days of him being tied up for his outbursts, Judge Hoffman ultimately sentenced him to 4 years in prison on 16 acts of contempt of court. Those charges however were later all appealed and dismissed, and as Seale left the courtroom, spectators could be heard shouting, “Free Bobby!”

Aaron Sorkin’s “The Trial of the Chicago 7” debuted on Netflix Friday.