The first trailer for Aaron Sorkin’s rousing and inspiring courtroom drama “The Trial of the Chicago 7” features a rallying cry that seems tailor-made for the protests that have engulfed the 2020 election and the Black Lives Matter protests around the globe: “The whole world is watching.”

The phrase repeats several times in the trailer and during the film as we see protestors clashing with Chicago police outside of the Hilton Hotel at the 1968 Democratic National Convention. In fact, the chant is so powerful in the trailer that at the premiere drive-in event for “The Trial of the Chicago 7” at the Rose Bowl Netflix held on Tuesday, the chant was repeated on speakers on a loop every few seconds before the screening began.

While “the whole world is watching” sounds like a Sorkin-esque catchphrase he would have written, the truth is, Sorkin didn’t just make it up for “The Trial of the Chicago 7.” Protestors actually made that line a rallying cry in 1968 as they faced down police, and it became synonymous with those riots.

As the Democratic National Convention began on August 26, 1968, youth protestors from various groups — including the Youth International Party, National Mobilization Committee to End the War in Vietnam, Students for a Democratic Society and more — all gathered in Grant Park in downtown Chicago and in Lincoln Park on the city’s north side. A blog post for the Chicago History Museum explains that the crowd grew until on Aug. 28, tensions boiled over. The Chicago Police Department and the Illinois National Guard then moved in, causing the scene to turn violent. 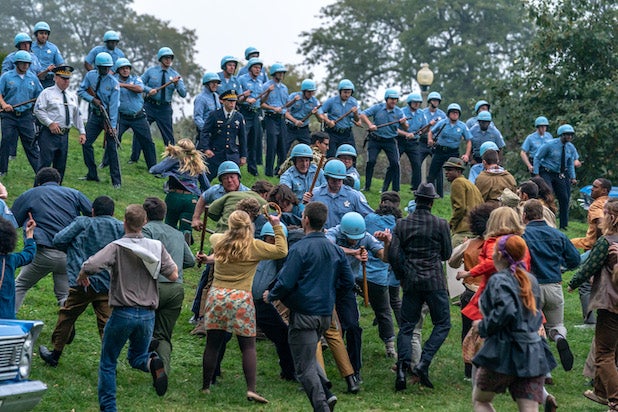 But what made the protests such a watershed moment in American history was that the images of police brutality were broadcast to a national audience, where the world really did hear the chants “the whole world is watching” on TV. “The Trial of the Chicago 7” blends in riot imagery and flashbacks to the protests in with the courtroom drama, and Sorkin shot on location in Grant Park in order to match locations with the real-life footage. You can see video and hear the chant above to get an idea of how closely the film resembles reality.

Those demonstrations also became the starting point for the modern-day political protest, and in a video for The New York Times, activist Tom Hayden (played in the film by Eddie Redmayne) described hearing the chant for the first time.

A detailed report in The Guardian for the 50th anniversary of the protests described that by the 28th, over 10,000 demonstrators had gathered in Chicago. But they were met by 6,000 national guard troops and 6,000 army troops joining the 12,000 Chicago police officers, some of whom removed their badges and name tags before jumping into the fray, leading Walter Cronkite to describe the scene outside the convention as a “police state.”

The Guardian also reported that across the four days and nights of protests, “668 people had been arrested, 425 demonstrators were treated at temporary medical facilities, 200 were treated on the spot, 400 given first aid for tear gas exposure and 110 went to hospital. A total of 192 police officers were injured.” When police blocked marchers on the road to the Hilton, they finally began their immortal chant of “the whole world is watching.”

While the exact origins of the phrase are unclear, it has been oft-repeated, whether in songs or at protests against the Iraq War and Occupy Wall Street, to name a few.

“The Trial of the Chicago 7” is available on Netflix Friday.