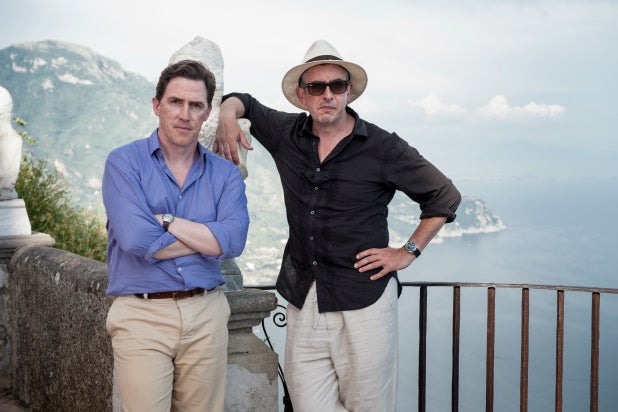 The band has gotten back together for “The Trip to Italy,” and everything has amplified: instead of just Caine, our stars impersonate all the major cast members of “The Dark Knight Rises”; the restaurants are now in sunny Italy, with a journey that heads to the breathtaking vistas of Capri and the Amalfi Coast; and “Coogan” and “Brydon” are a little older but apparently no wiser.

Both films play on the fact that Brydon is more beloved among British TV fans while Coogan is a bigger name in the U.S., but “Italy” raises the idea of Brydon getting to audition for a role in a Michael Mann movie, the prospect of which makes Coogan fairly squirm with envy.

And while it was Coogan who had a misbegotten fling in the previous movie, this time it’s Brydon — with a wife and baby at home — who carries on with a pretty British expat (Rosie Fellner) who’s crewing a boat in Italy.

Again, Coogan and Brydon are playing characters with their own names and their own professional credits, but this isn’t a documentary. Coogan introduced the awful – or more awful, perhaps – version of himself in Winterbottom’s “Tristram Shandy: A Cock and Bull Story,” and he never goes out of his way to make “himself” more likable. Brydon matches him quip for quip throughout, and while he’s the lesser-known quantity on these shores, he very handily holds his own, even as his actions become less and less defensible.

We see Brydon’s wife and Coogan’s son along the way, but they’re both fictional characters played by actors. (Brydon actually has several children; Coogan has a daughter in real life, but no son.)

From Brydon’s infidelity to both men’s frequent Alanis Morissette sing-alongs in their rented Mini — they brought along Rossini CDs but never play them — there’s a through-line of middle-aged anxiety and a longing for the freedom of youth. The trade-off, “The Trip to Italy” seems to imply, is that even if getting older can be a drag, at least the meals get much, much better.