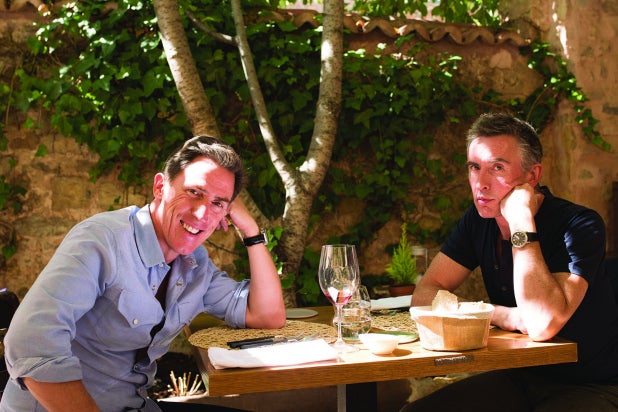 “The Trip to Spain” is the third movie in a series starring Steve Coogan and Rob Brydon as versions of themselves. (It has also played as an expanded group of episodes on television.) In their first film from 2010, “The Trip,” they toured restaurants in Northern England and did many impressions of actors, most notably dueling impersonations of Michael Caine so stingingly accurate that it will probably be impossible to watch Caine ever again without thinking of Coogan and Brydon and their send-up of him.

They took “The Trip to Italy” in 2014 and reprised their Caine impersonations amid many sharp barbs aimed at each other about aging and ego, and now they have set off for Spain, where the food looks quite tasty. This picture is 115 minutes of nearly wall-to-wall actor impressions, and that does get to be too much of a good thing, unfortunately.

We see Brydon run through his repertoire of Al Pacino, Woody Allen, and Anthony Hopkins, and Brydon and Coogan both try out versions of Ian McKellen and David Bowie while Coogan does a dead-on John Hurt. Impressions of famous actors used to be considered one of the lowest forms of show business, and certainly one of the corniest, but these “Trip” movies rely on them to an excessive extent.

Also Read: 'The Dinner' Berlin Review: Laura Linney, Steve Coogan Cram Too Much on Their Plate

The funniest impression here is probably the first time that Coogan does a very physical and peacock-like take off on Mick Jagger, but the problem is that he does Jagger again later on in “The Trip to Spain,” as if the Rolling Stones front man were performing Shakespeare, and this just isn’t as amusing as Coogan’s much simpler earlier scene as Jagger. The problem with so much modern comedy is that nobody seems like they are able to edit themselves anymore.

These “Trip” pictures are road movies with maybe something in common with the playful road movies that Bing Crosby and Bob Hope used to make in the 1940s, and like those movies, the laughs come from the competition between the stars. Whereas the one-upmanship between Hope and Crosby was basically benign, with Coogan and Brydon there is always a sense of danger because they might say something really cutting and memorably cruel about others or about themselves.

But they are both always flirting with sentimentality, too, particularly Coogan, who can look at Brydon with contempt, amusement, and something approaching love all in quick succession. Coogan’s comic timing is lethally direct, but Brydon is always throwing him curveballs to unsettle him, and that’s when the laughs can get really big.

They look rather similar, but the supercilious Coogan usually tries to be the controlling top dog while Brydon is the sidekick, so that Coogan is the Crosby or Oliver Hardy figure while Brydon is the Hope or the Stan Laurel. They translate these comic archetypes over to a dry British comic tradition and overlay it with modern reference-laden comedy, as if they can never have a conversation where they don’t mention a movie or an actor or actors in a movie.

Somehow the sadness in these “Trip” films always feels intrusive rather than organic. Coogan and Brydon are much better at cracking jokes and building comic routines together than tugging at heartstrings. (It’s somewhat difficult to feel sad for two men who are being paid to eat and do silly voices with each other.) For some reason they rarely seem to be enjoying the very fancy food they eat at various restaurants, which is another aspect of this series that does not exactly endear them to us.

In “The Trip to Spain,” they do little sketches based on their knowledge of the Spanish Inquisition that are not exactly laugh riots, and director Michael Winterbottom keeps pushing a Michael Nyman score on this movie that feels out of place. When Nyman gets going on the soundtrack with his poignant repetitions, it feels like Emma Thompson is about to stumble into the frame to copiously weep over something, but instead we get the spectacle of two hams doing impressions while they dine.

At one point in this movie Coogan and Brydon are both singing “The Windmills of Your Mind,” and Brydon mentions that the most notable version of this wordy tune was done by Noel Harrison, the son of Rex Harrison. And Rex Harrison sang the song “The Rain in Spain” in “My Fair Lady,” and Brydon points out that it is raining on their car as it drives through Spain. If this is the kind of chain of references that thrills you, then “The Trip to Spain” is your sort of movie.

What Coogan and Brydon are doing in these films is an acquired taste, but if they want to continue on doing them then they’re going to need to cut down and edit their interminable actor impressions.