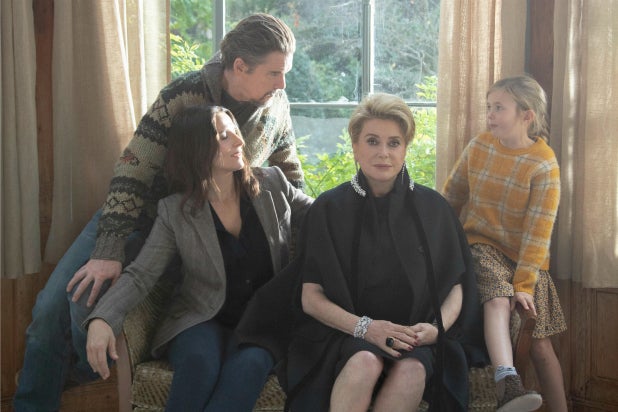 In the latest film from Hirokazu Kore-eda (director of the 2018 Palme d’Or winner “Shoplifters”), Catherine Deneuve plays a legendary French film star who has just published a memoir titled, like this movie, “The Truth.” It’s a promise that her book comes nowhere near fulfilling; as for Kore-eda’s first film made outside his native Japan, it’s a fascinating exploration of the fallibility of memory and of how the truths we tell ourselves so frequently outweigh an empirical certainty.

Deneuve’s Fabienne falls into the great screen tradition of actresses capable of great emotion on stage or screen but less so off. (Think Bette Davis’ Margo Channing in “All About Eve” or Gena Rowlands’ Myrtle Gordon in “Opening Night.”) She also shares some DNA with Ingrid Bergman’s musician in “Autumn Sonata” or Shirley MacLaine’s movie star in “Postcards From the Edge” — have we acknowledged how much Mike Nichols was borrowing from Ingmar Bergman on that one? — in that her career always came before her duties as mother to her daughter Lumir (Juliette Binoche), now a grown-up screenwriter.

Lumir, her actor-husband Hank (Ethan Hawke) and their young daughter, Charlotte (Clémentine Grenier), have come to Paris from New York to celebrate the publication of Fabienne’s book, but Lumir wastes no time digging into the tome with red pencil and Post-It notes at the ready. She points out that Fabienne’s portrayal of herself as a doting mother is completely false, but Lumir comes out better in the book than others; Fabienne’s longtime caretaker Luc (Alain Libolt, “The Lady and the Duke”) was left out entirely, while Lumir’s father, Pierre (Roger Van Hool, “As Above, So Below”), is listed as dead when he’s very much alive.

Fabienne is also making a movie, opposite young up-and-comer Manon (Manon Clavel); Manon is being compared to a friend and peer of Fabienne’s, the late Sarah, who was in many ways Lumir’s surrogate guardian. Sarah’s memory remains a sticking point between mother and daughter, and the film Manon and Fabienne are making prompts more painful recollections in Lumir: It’s about a mother forced by disease to live in space, visiting Earth every 10 years and remaining the same age while her daughter gets old, a powerful metaphor for Fabienne’s frequent, lengthy absences during Lumir’s childhood.

Kore-eda’s screenplay makes it clear that Fabienne fully understands the choices and the personal sacrifices she has made over the course of her career; “I’d rather be a bad mother and a bad friend and a good actress,” she tells Lumir at one point. “You won’t forgive me, but the public will.”

For her part, Lumir often shows herself to be her mother’s daughter, from the unreliability of her own recollections to her skill at literally putting words into other people’s mouths: Fabienne claims never to have apologized to a man, so she needs a script when she begs Luc to return. (Writers, Kore-eda seems to be saying, aren’t to be trusted any more than actresses are when it comes to the truth.)

Deneuve and Binoche are titans of their respective generations, and to see them clash on screen is exquisite entertainment. They pepper resentment and impatience with grace notes of humor and compassion, and the results feel genuine, even in a setting that is rife with play-acting. Hawke, too, shines. It’s tricky for successful, accomplished actors to play untalented, struggling ones without delving into condescension, but he never plays the role from atop a perch.

Cinematographer Eric Gautier (“Ash Is Purest White”) and Kore-eda (who also edits) give us a full sense of the spaces in which Fabienne exists — her home (palatial, but next door to a prison) and the studio (a multi-level affair with green-screens scattered throughout for Manon’s sci-fi movie). The two settings also allow Fabienne’s acting world to meld with her real one, which perfectly underscores the nature of her character.

If Kore-eda’s “Shoplifters” was about discarded people coming together to form a family, perhaps “The Truth” is the opposite, where flesh-and-blood relations have to figure out how to forgive, or at least to understand, each other. Even working in another language and on another continent, he once again captures the intricacies of the human condition.