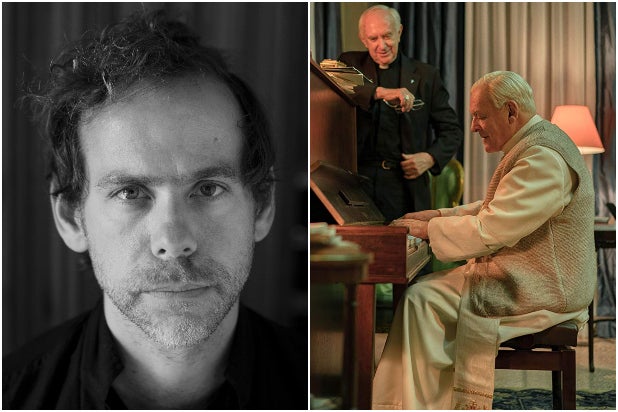 To the casual observer, Bryce Dessner may just look like another rock star turned film composer, part of a group that includes Jonny Greenwood, Trent Reznor and many others who have dabbled in both worlds. But as one of the guitarists behind the indie rock stalwarts The National and more recently the composer for “The Two Popes,” Dessner clarified that for him, this isn’t just some random left turn.

While it may sound as though his work with The National and the classical score on “The Two Popes” are worlds apart, Dessner has classical music training and advanced degrees in composition from Yale. He says he brings one thing to the table, and it’s not as if he’s suddenly putting on a new hat whether he’s collaborating with The National frontman Matt Berninger, director Fernando Meirelles or the New York Philharmonic.

“I’m very much the same person. The secret may be the collaboration at the heart of these projects that allows me to bring whatever I’m strongest at to something,” Dessner told TheWrap. “I’m definitely not a guy who decided at age 40 to switch and do some classical stuff.”

Dessner got a taste of what it’s like to be in a collaborative film environment when he was one of several composers on Alejandro Iñárritu’s “The Revenant.” But he comes from a background of classical music and has several advanced degrees in music composition from Yale. He was even following in the footsteps of composers like Steve Reich and Philip Glass just as The National was getting together in the early 2000s in New York. This world was really nothing new.

“The Two Popes” however took him back to his early days of playing, even inspiring him to break out the classical guitar, something Dessner hasn’t done in years. Meirelles wanted two distinct sonic tones for the film’s protagonists, Pope Benedict (Anthony Hopkins) and Cardinal Bergoglio (Jonathan Pryce), the man that would become Pope Francis. Dessner incorporated stately, Wagnerian strings for Benedict compared to more intimate, folk sounds to fit Bergoglio’s mood.

And he even got the chance to play and write on his guitar in the “surreal environment” of a replica Sistine Chapel constructed for the film. Meirelles allowed him the chance to meet with and observe Anthony Hopkins and Jonathan Pryce on set, and much of the music writing was even done off-picture without the aid of the completed footage. As a result, all the guitar you hear in the film is Dessner himself playing, another rarity for his film scores.

“It was really fun to have a really wide palette to choose from for ‘The Two Popes,'” Dessner said. “That’s a good example of how Fernando is quite open-minded and was encouraging me to dream big about what music could do for this. He didn’t want a typical, straight-up film score.

“The Two Popes” is also just one of several creative works Dessner has put out this year, from the score for the film “The Kitchen” to a pair of classical albums including the recent “Tenebre” and a composition called “Wires” that made its debut in a performance at the New York Philharmonic earlier this month. That doesn’t even include a new album, tour and accompanying short film, “I Am Easy to Find,” with The National.

It would seem as if he’s had an incredibly prolific year. The difference though is that while his creative process with The National could take a matter of months if not weeks before we see the results, any classical work is often the result of years of effort and planning.

“It can seem insane,” Dessner said. “That tends to be the most exciting and sometimes the maddening part of my life, that in my work with The National, things are decided much quicker, where we’re deciding right now what we’re doing in April.”

But despite those differences, Dessner would argue there isn’t such a strict division between rock and film as it might seem. He’s come to know many musicians who one night might be performing with The National, the next night be performing at Carnegie Hall with an orchestra and then turn around and perform a more experimental art project.

“Just like our bands are really different, any musician’s background is so unique. So we each come to music in different ways,” Dessner said. “That tends to be the most confused when someone plays electric guitar actually also writes orchestral music, but it’s actually not even that special anymore.”

Dessner said that all of his worlds collided with “I Am Easy to Find,” the short film and visual album The National worked on with director Mike Mills. Dessner wrote film compositions as the score that wound up incorporated into tracks on the album. And though he says the sounds on “The Two Popes” are very much their own piece, the experience of working on film scores has in part helped the evolution of the band.

“We try to make honest music and music that comes to us, and really who I am I guess, some of those experimental sounds and some of those subversive sounds is stuff I do naturally,” Dessner said. “I’m always interested in evolving and changing and whatever takes me in that direction.”

“The Two Popes” opens in theaters on Wednesday and then makes its debut on Netflix on Dec. 20. Dessner’s companion soundtrack album for “The Two Popes” is also available in stores via Milan Records on Dec. 6. You can listen to a track from “The Two Popes” soundtrack, “Walls 2,” below.