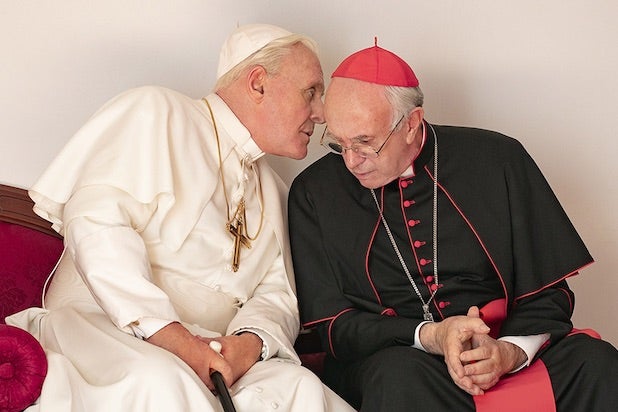 Fernando Meirelles is back after working in television for the past few years. His latest film, “The Two Popes,” which had its world premiere at the Telluride Film Festival, turns out to be one of the best from the Brazilian director who also made “City of God” and “The Constant Gardener.”

“The Two Popes,” one of Netflix’s two Telluride films (the other being Noah Baumbach’s “Marriage Story”), is about two men on opposite sides of a spiritual debate that will eventually decide the fate of the Catholic Church.

“If I wanted to kill myself, I’d climb my own ego and jump off of it” is just one of the many droll lines throughout the script by Anthony McCarten (“Darkest Hour,” “Bohemian Rhapsody,” “The Theory of Everything”), which focuses on the moment the Catholic Church changed hands from Pope Benedict XVI to Pope Francis and forever vowed to leave the past behind and embrace a newer, cooler Pope.

That line, by the way, is one of many said by Jonathan Pryce as the beloved Pope Francis, a warm and friendly man who doesn’t believe in eating alone, and whose mission is to make the world aware of the problems of income inequality, the refugee crisis and climate change, in addition to widespread poverty and growing hatred around the world.

Before he becomes Pope Francis, he is Argentinian Jorge Mario Bergoglio, who found himself called to service at a young age. Much later in life he meets with Pope Benedict (Anthony Hopkins), and the two men begin to form what will be a lasting friendship.

Their conflicts are many — their world view is nearly opposite, but they share a love of God and the Church. Much of “The Two Popes” is simply an ongoing dialogue between these two men, peppered with great one-liners throughout, like Pope Benedict saying, “It’s a German joke. It doesn’t have to be funny.”

Ultimately, though, “The Two Popes” is a film about right now. It can’t be about anything else, because when Pope Benedict resigned and Bergoglio became Pope Francis, everything within the Catholic Church changed. Part of this is the acknowledgement of how little the Church did to rid itself of bad priests who molested children but were never held accountable. Part is what Francis does when he ascends — how he goes places popes never go, visits with people mostly unseen and fights for the rights of the underclass.

As Pope Francis said, “I prefer a church which is bruised, hurting and dirty because it has been out on the streets, rather than a church which is unhealthy from being confined and from clinging to its own security.” Though it takes some convincing, each of these two popes eventually come to a common understanding, and more than that, a deep affection for one another.

What makes “The Two Popes” so delightful, other than the very funny script, is watching two seasoned actors play off each other for two hours. Both Hopkins and Pryce illustrate what the craft of acting is really about. It isn’t just showing up with charisma and holding the attention of the audience. Any movie star can do that. But these two are world class career character actors. There isn’t anything they can’t do.

Pryce has somehow never been nominated for an Oscar for acting. He’s flown under the radar all of these years without having that one moment where the industry singles him out for his magnificent work. That very well might change with this performance. (Three of the last five Best Actors have won with McCarten scripts.)

Pryce knows the character he plays so well that there is never a moment where he slips out of it. He also knows everybody loves Pope Francis. Pryce shows us exactly why they do.

“The Two Popes” is greatly entertaining, despite it being a long conversation with breaks that take us into the flashbacks of Bergoglio’s early life. The combination of the adept and seasoned actors, the witty repartee of the script and Meirelles’ bent towards humor take what might have been didactic and preachy and transform it into something heartwarming and even inspirational.

This is a film that is more about two men watching football and drinking beer than it is about the higher calling to Christ. What better way to be introduced to the necessary teachings of the coolest Pope who ever lived?