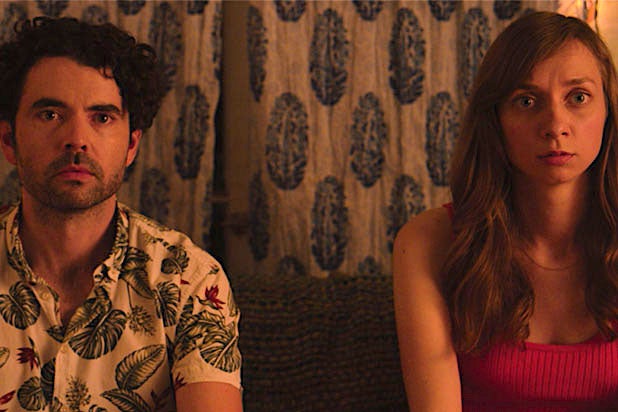 Robert Schwartzman brought his latest movie to SXSW on Saturday and offered a very different take on the traditional romantic comedy: a longtime couple who hopes to save their relationship with a ménage à trois.

“The Unicorn,” which is currently on the hunt for a distributor, was greeted with laughter and enthusiastic applause at its world premiere screening at Austin’s Stateside Theatre.

See Video: Olivia Wilde on 'Fighting the Patriarchy' and Directing Her First Movie

They go to a bar in Palm Springs and meet a girl named Jesse (Lucy Hale), a spiritual young woman who brings Mal to life. When Cal arrives, he notices the change in his partner too.

But when they go back to Jesse’s house, an evening of and “energy reading” leads to the discovery that the invitation was all a big and complete misunderstanding. Hale’s character had the audience bundled over in laughter because she’s just so weird.

The couple then winds up at a sex club (which also fails) until they end up in their own hotel room with a massage therapist. Ultimately, though, the film centers on Mal and Cal’s fear of commitment — which Mal’s mom (Beverly D’Angelo) suspects traces back to her daughter’s girlhood inability to decide between getting a pet turtle or a pet dog.

The film also hits on society’s overall obsession with labels — when Mal and Cal go to the strip club, they meet the owner (Beck Bennett) who doesn’t want to be defined as gay or straight.

“The Unicorn” runs just 88 minutes but packs in a lot of material.  It’s refreshing to see Lapkus back on the big screen, and her chemistry with Rutherford, while a little awkward at times, is endearing, charming and sweet.