“The View” dedicated Thursday’s episode to remembering and discussing the horrific events of Jan. 6 on its one-year anniversary. Using the top of the show to discuss Biden’s speech on the matter, Ana Navarro noted there was one key aspect missing from the president’s condemning words: Donald Trump’s name.

On the whole, Navarro was pleased with Biden’s general message, calling it “the right thing to do for America, for democracy, and for history.” That said, she argued it was a mistake for Biden not to call out the former president by name when talking about who was responsible.

“I am sorry he didn’t pronounce Donald Trump’s name,” Navarro said. “When he says the former president, which he said 16 times, he should have said Donald J. Trump is responsible for what happened, and said his name. This is not Harry Potter. Donald Trump is not Lord Voldemort. :et us call out his name and lay the blame where the blame should be placed.” 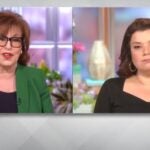 Beyond that though, Navarro praised Biden for being “forceful” and called his overall message “brilliant.”

Meanwhile, host Joy Behar disagreed on the necessity of using Trump’s name at all. Continuing her duties as moderator while Whoopi Goldberg is out for the week after testing positive for COVID, Behar argued that the public knows Biden was referring to Trump.

“I think that Americans know precisely who he’s referring to,” Behar said. “Just as they knew for years that Whoopi, when she would say ‘you know who’, we know exactly who she was referring to. So I don’t think that that’s a big deal. It’s almost like [Biden] can’t say his name really, because it bothers him.”

You can watch the panel’s full discussion on Jan. 6 and who has been — and who should be — held accountable in the video above.