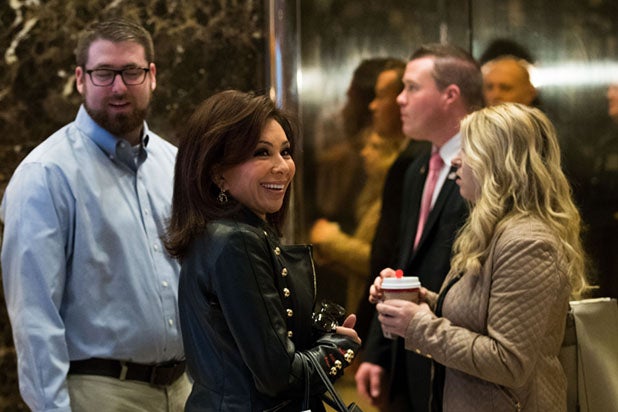 Judge Jeanine Pirro faced a heated on-air confrontation with “The View’s” Whoopi Goldberg on Thursday, but the Fox News host says things only got worse backstage when Pirro was told to “get the f— out.”

“I went on thinking that we would have a discussion about [my] book. The truth is, that it was an attack on Donald Trump, and then on me,” said Pirro, in an interview on Sean Hannity’s radio show after the fact.

The “Justice With Judge Jeanine” host was on the ABC daytime talk show to promote her upcoming book “Liars, Leakers and Liberals,” but the segment quickly went off the rails when the two women got into a shouting match over Pirro’s support for Donald Trump and the White House’s immigration policies.

Pirro pushed back in defense of the Trump administration’s stance on immigration by arguing that “people who shouldn’t be here end up murdering the children of American citizens,” prompting Goldberg to shout, “Say goodbye, bye! I’m done.”

“What people didn’t see [when they] were watching the show, was she yanked away from the desk where we were all sitting and she decided that she was going to end it,” Pirro told Hannity. But the spat didn’t end there.

After the segment was cut short — by about 30 seconds, according to an individual familiar with the situation — Goldberg exited the stage and was waiting to return for one final segment, when she had another encounter with Pirro.

According to the individual, the situation was in fact instigated by Pirro, who approached Goldberg and said, “I’ve done more for abused women than you ever will.” The individual also said Pirro came in “looking for a fight” because producers did not make her aware that CNN’s Ana Navarro would serve as guest co-host on the episode.

Representatives for “The View” declined TheWrap’s request for comment.

Also Read: Geraldo Loses It on 'Hannity' Over Trump Immigration Policy: 'This Is an Obscenity' (Video)

In her conversation with Hannity, Pirro described the experience as “horrific,” insinuating that she was set up to take a beating.

“So forget about what she did to me on set, which was horrific in itself, but the treatment by Whoopi Goldberg is typical of what is going on in this country,” Pirro said. “The left, they invite you on to talk, they then won’t let you talk, they throw you off the show and then they throw you out of the building.”

“The problem is once one starts doing it, the rest of them are going to start doing it,” she continued.

Watch the segment below.