The hosts of “The View” may not be pleased with the latest political developments on women’s rights, but they don’t think people should be blaming Biden for not doing more.

During their penultimate show in the Bahamas on Thursday, the women kicked off their Hot Topics discussion with the question of why Americans have been so angry at Biden for not codifying abortion rights and more through his presidential powers, and instead encouraging congress to act and voters to elect pro-abortion candidates on more local levels. And for Ana Navarro, that tactic is a fair one — especially since there are limits on the powers of the president.

“The truth is, this is not a monarchy. He is not an emperor. He is not a dictator. This is a democracy where there are three equal branches of government,” she said. “And so, he can’t snap his fingers and make this go away. Elections have consequences, and Republicans got in line.”

Host Joy Behar agreed, saying that Republicans made sure to vote for Trump because “he promised them the Supreme Court,” though neither Behar nor Navarro touched on the fact that Trump lost the popular vote, or the fact that Democrats have the voting majority in the House and the Senate (the latter being if Vice President Kamala Harris is needed to break a tie). 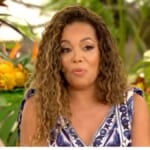 Behar then argued that Biden has been trying to sign his plans into action, but has been roadblocked by his own party.

“Why do you blame Biden? Biden had a promising agenda and it was derailed by the DINOs in Congress: Manchin and Sinema. Manchinema,” she said. “And that’s what happened. So, to blame Biden — the guy is trying.”

Host Sara Haines guessed that the Biden administration is intentionally not challenging the Supreme Court in an effort to show Americans how separation of powers is supposed to work. She added that the previous administration “often skewed the line” of who had final say over certain matters, and admitted that she thinks it wouldn’t “be a good look” for Biden to “come down” on the Supreme Court.