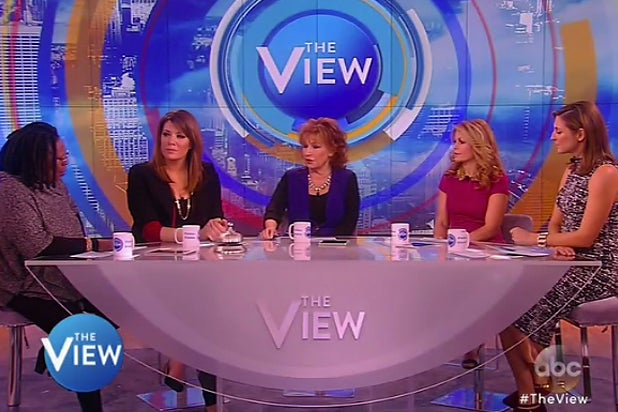 To be fair, the Republican presidential candidate gave them a true hot topic to discuss as over the weekend, a #BlackLivesMatter protester who spoke up at a rally was allegedly roughed up by his security team.

Trump added fuel to the fire when he called into Fox News Sunday morning to discuss the issue.

“Maybe he should have been roughed up, because it was absolutely disgusting what he was doing,” Trump said. “I have a lot of fans, and they were not happy about it. And this was a very obnoxious guy who was a trouble-maker who was looking to make trouble.”

Most of “The View” panelists strongly disagreed with Trump’s response to the incident.

“Do you really want the potential leader of the free world to condone violence, but he’s encouraging it?” said Paula Faris, bringing up when a #BlackLivesMatter group interrupted a Bernie Sanders rally. Sanders didn’t engage with his protesters, and came off “cool calm and collected,” according to Faris.

Candace Cameron Bure seemed to be the sole dissenter among the group on this issue.

“I do not advocate violence in any way, but I have a hard time looking at any protester,” she said. “There should be civil protesting, peaceful protesting, but when anyone comes in and disrupts an event, I have a problem with that. It doesn’t make me want to look at them and listen to them more when they’re being disruptive.”

Whoopi Goldberg and Joy Behar took this as an opportunity to school Bure on Civil Rights history, with Behar referencing Larry Kramer and the AIDS crisis, when the activist realized disruption was the only way to get heard.

Goldberg brought up “people being eaten by dogs” in the 1960s in order to disrupt events in protest.

“It is part of the American heritage to stand up and be civilly disobedient, and say, ‘I’m protesting what you’re saying,'” she said. “It’s part of what we’ve always done.”

When Bure brought up that they had a place designated for people to protest at the Trump rally, Goldberg retorted, “Yeah, it was in the back.”

“Sometimes it is loud and sometimes it isn’t pretty,” she went on. “But damn, don’t advocate roughing the guy up, and don’t say maybe he should have been roughed up, because you have no idea. Maybe he’s there because something happened to him.”

Goldberg also brought up a previous incident involving Univision reporter Jorge Rodrigues, who was also allegedly “roughed up” during a Trump event. She concluded the segment by inviting Trump on to the show to discuss the issue further.