The women of “The View” are pretty pleased that Chris Christie is officially breaking ranks with Donald Trump when it comes to The Big Lie surrounding the 2020 election. But Joy Behar made sure to warn the former governor of New Jersey on Monday morning that there will be consequences for doing so.

During his appearance on the show to promote his new book, Behar took the first question, and pressed Christie on what made him decide to push back against his longtime friend.

“You made Trump really mad last week. You really got him upset. Why did you do that?” Behar questioned. “Because you called on Republicans to stop ‘wasting time’ talking about the 2020 election. He’s already punching back with insults about your time as New Jersey governor. You’ve been his friend for years, although I don’t really understand that. Why turn on him now? You know, you see what happens to Republicans when they turn on Trump, they’re toast!”

In response, Christie stood by his words, and even threw in another dig at Trump himself.

“I’ve always been about the truth. And he lost the election in 2020,” Christie said. “And to continue to talk about it having been stolen undercuts our democracy, and if you just want to be a partisan Republican, it’s not good for our party. It’s not good for us to be able to present an alternative to what Joe Biden is doing if what we’re doing is talking about what happened a year ago. So it’s just wrong.

“And look, he took a shot at me, and that’s fine. it’s his right to do. And I just reminded everybody that — you know he talked about my approval ratings and all the rest — I said well, when I ran for election in New Jersey, I got 60 percent of the vote. And when he ran for election, he lost to Joe Biden. So, he wants to have that conversation, I’m happy to have it.” 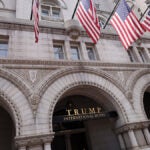 At that, the women laughed, but Behar warned “He’s gonna get you!”

Christie wasn’t too perturbed though, saying that people from New Jersey are “hard to get.” He added that “if that’s a fight you got to have, it’s a fight worth having.”