Meghan McCain kicked off a new week on “The View” by once again criticizing President Joe Biden. This time, the host took issue with his views on abortion.

Kicking off the show’s “Hot Topics” for the day was a discussion on the U.S. Conference of Catholic Bishops voting to move forward with a process that could deny Joe Biden and other politicians communion. On Friday, it was announced that the bishops voted 168-55 in favor of drafting “a formal statement on the meaning of the Eucharist in the life of the Church.”

The move comes in large part because of Biden’s pro-choice beliefs, and his support of abortion rights for women. Though the women of “The View” acknowledged that there should be a separation of church and state, Meghan McCain took issue with Biden’s policy choices seemingly clashing with his religious beliefs. 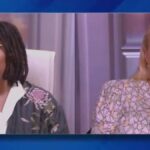 Also Read:
‘The View': Meghan McCain Calls Biden ‘100% Trumpy’ – and Whoopi Goldberg Is Not Having It (Video)

“Everybody’s spiritual journey and relationship with God and their church is their own personal journey, and I don’t try to proselytize my spirituality on other people,” McCain said. “But if you are a devout Catholic as President Biden claims to be, abortion is a cardinal sin that can do deep spiritual harm to you.”

Though McCain never outright said that she agreed with the bishops’ choice to deny Biden communion, she did note that the decision is something that’s entirely up to the church, before doubling down on her criticisms of Biden’s beliefs.

“It’s ultimately up to the church. But he’s walking a very fine here,” McCain said. “But ultimately, all of these issues are literally life and death for Catholics, for devout Christians. He’s going to ultimately have to talk to his Creator when the time comes, as we all do, and reconcile his politics with his personal faith. I believe he’s doing grave spiritual harm to himself and to this country.”

You can watch McCain’s full answer via the video above.