It took some time for the hosts of “The View” to tackle Tucker Carlson’s promotion of testicle tanning, but on Wednesday, they finally got around to it. And thanks to a joke from Ana Navarro, the segment ended in raucous laughter.

As the first segment landed on the Democrats’ agenda, Sunny Hostin argued the party needs to be talking about the things they want to do more — for example, canceling student loan debt — rather than letting conversation be dominated by GOP antics.

The women called out Carlson’s recent special in particular, in which he promoted testicle tanning as a means of combating a purported decrease in testosterone, and mocked the fact that it got so much attention. Of course, Navarro had a quip for the situation.

“Now we know why Tucker doesn’t like Latinos and African Americans,” she said, prompting Hostin to joke that it was a “little envy.” But Navarro got a bit more specific. 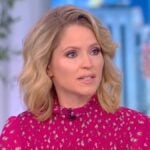 Also Read:
‘The View': Sara Haines Thinks Elon Musk Might Actually ‘Reduce Some of the Toxicity’ on Twitter (Video)

Try as she might, Joy Behar couldn’t get the conversation back on track after that. The joke seemed to have a delayed landing at the table, as the women slowly erupted into laughter one by one. But as it sunk in, Hostin absolutely lost it, clinking mugs with Navarro and guest host Amber Ruffin.

Eventually, Behar gave up and took the show to commercial break. “We missed that story last week, but leave it to us to resuscitate it,” she quipped before the camera cut.

You can watch the moment from “The View” in the video above.