Whoopi Goldberg returned to “The View” on Monday, following her two-week suspension for saying the Holocaust “isn’t about race.”

“I gotta tell you there’s something kind of marvelous about being on a show like this, because we are ‘The View’ and this is what we do. And sometimes we don’t do it as elegantly as we could,” Goldberg said at the start or Monday’s show. “But it’s five minutes to get in important information about topics. And that’s what we try to do every day. And I want to thank everybody who reached out while I was away, and I’m telling you people reached out from places that made me go, ‘Wait, wait, what? Really?’ And it was amazing. And I listened to everything everybody had to say. And I was very grateful.”

Goldberg continued to add that she won’t shy away from any hot topics in the future. You can watch her full statement in the video above. 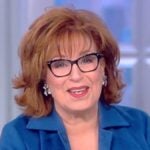 Goldberg was suspended just days after saying the Holocaust was “not about race.” Instead, she argued, “It’s about man’s inhumanity to man. That’s what it’s about.” Goldberg drew immediate criticism online, prompting her to apologize.

In the days following, Goldberg issued multiple apologies, both online and on the air, but ABC News president Kim Godwin opted for further action. 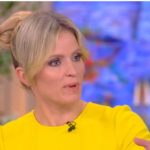 “While Whoopi has apologized, I’ve asked her to take time to reflect and learn about the impact of her comments,” Godwin wrote in a statement on Twitter. “The entire ABC News organization stands in solidarity with our Jewish colleagues, friends, family and communities.”