Whoopi Goldberg didn’t have any kind words for Florida Gov. Ron DeSantis on Thursday morning, after it was revealed that he used taxpayer money to send two planes full of migrants to Martha’s Vineyard. According to the host of “The View,” it was a “nasty” move made by a “bonehead” — and a hypocritical one at that.

The situation led the Hot Topics discussion on Thursday’s show, with Whoopi offering her thoughts before opening the question to the table. To start, she cited the Statue of Liberty.

“Call me crazy, but I remember the big tall green lady, you know, the one that’s over on the river, and she kind of said, ‘Send me your tired, your poor, your huddled masses yearning to be free,'” Whoopi recited. “‘The wretched refuse of your teeming shore send these the homeless, the tempest, toss to me.’ I thought that was part of what we did here in the United States. We welcomed people, invited people who were going through crap in the countries they lived in, getting abused in the countries they lived in. I thought we asked people to come here.”

Whoopi then used a very specific example — DeSantis’s own great-great-grandmother. According to the host, DeSantis’s relative arrived at Ellis Island in 1917 from Italy. 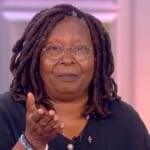 Also Read:
‘The View’ Host Whoopi Goldberg Shreds Kevin McCarthy for Getting Political on 9/11: ‘Nobody Wants to See You’ (Video)

“She also could not read or write, but no one gave her permission to come,” Whoopi said. “She come, and we still took her in.”

Goldberg conceded that she understood that DeSantis was trying to “make a point” by sending these migrants to sanctuary cities, but noted that making a point doesn’t supercede having some humanity.

“These are people you’re playing with. These are real life people, with children and older people,” she said. “And you know, we can work it out. But if you’re going to be a bonehead, who wants to play with you? You know, call me crazy, but I don’t understand why you got to be nasty about it.”

You can watch the full discussion on DeSantis from “The View” in the video above.