Sunny Hostin was a little uh, hot and bothered after a nude scene featuring actor Jesse Williams was leaked earlier this week. So much so, in fact, that Whoopi Goldberg literally sprayed her co-host with water to “cool off” during Wednesday’s episode of “The View.”

The scene comes from the Broadway show “Take Me Out,” in which Williams stars alongside fellow ABC alum Jesse Tyler Ferguson. And though Ferguson, as well as the Actors’ Equity Association have condemned the leak, Williams brushed it off, simply saying, “It’s a body!”

For the most part, the hosts of “The View” agreed, though Whoopi did point out that if it were a female actress who had been captured, “We’d be pulling our hair out.” But, with Williams’ own dismissal of the incident, Hostin felt a bit better about how…intently she looked at the leak. 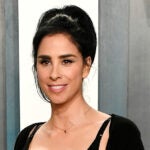 Also Read:
‘The View': Sarah Silverman Defends Sharing a Toothbrush With Her Boyfriend

Of course, in explaining just how much she looked at the photos, Hostin made sure to list a slew of compliments for Williams’ physique.

“Jesse Williams looks like a specimen. He looks gorgeous, he looks beautiful, his body is beautiful, and I have at least — and this is serious — 20 friends that have now bought tickets because of what they saw,” she added. 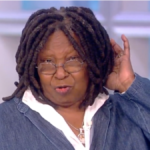 Ironically, Whoopi had a spray bottle on hand, as she began the segment by pretending she was watering a giant flower that Behar had worn as part of her outfit for the day. This time though, she crossed the table to spray Hostin in the face.