If you could view it in the context of no context, “The Visit” might just be another slightly second-hand B-movie horror film, one with its fair share of jump scares and a select precious few moments when you feel something like a true shiver of fright or fear run through you unbidden.

If “The Visit” — with its star-free cast, “found footage” presentation through the camera’s POV and sound effects that are 10,000 times more creepy than anything CGI could enable you to see — were the debut by a young writer-director working with a limited budget, I could see myself being intrigued by its gusto and interested in seeing what the filmmaker did next.

But context does matter, and the fact that “The Visit” is not some young talent’s first film, but, rather, M. Night Shyamalan‘s 11th, coming on the heels of both “After Earth” and “The Last Airbender,” films whose gigantic budgets were linked, as if through voodoo, to the minuscule size of their audience.

Working with producing wunderkind Jason Blum — whose philosophy of fast-and-cheap makes for profitable horror films, if not always good ones — Shyamalan keeps “The Visit” a lowdown and simple affair, but you also can’t help but feel a little annoyed by it; it’s so low-profile it’s almost invisible, so fast-and-dirty it winds up a smeary blur.

Teens Rebecca (Olivia DeJonge) and Tyler (Ed Oxenbould) love their mom (Kathryn Hahn); in the name of giving her some alone time on vacation with her new beau, they agree to go on a train trip to stay with mom’s long-estranged mom and dad, whom she hasn’t seen in years but recently reconnected with.

Despite the hinted-at unspoken fracture from long ago when mom left home, Nana and Pop Pop (Deanna Dunagan and Peter McRobbie) couldn’t be happier to see Becca and Tyler. They want to help Becca with the documentary she’s making (which is also the device capturing all the action); they want to hear all of Tyler’s rap songs, which he performs under the name T-Diamond Stylus.

It’s a lot of fun, until things start going bump in the night and Nana and Pop Pop are what’s bumping and the thumping and other creepy things …

For all its flaws, “The Visit” has great casting: DeJonge and Oxenbould seem like real kids — clever but not precocious, unsure about the adult world but hardly naive. And the two actors playing Nana and Pop Pop, Dunagan and McRobbie, are true finds: She’s a Tony winner with the face of a Midwestern matriarch and the ability to change gears on the fly; he’s played a long line of criminals, cops, or criminal cops over the years, and his grizzled authority seems both rock-solid and as insubstantial as a breeze when things start getting creepy. 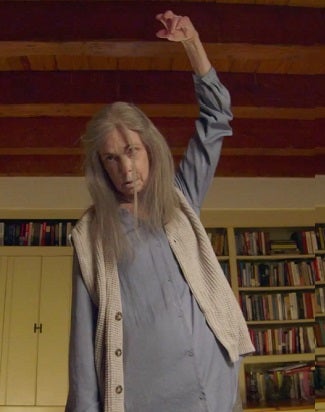 he sound editing is also superb — a lot of this film works best when you can’t see it, whether quiet creaks or loud thuds on the other sides of locked doors. And the location is so full of signifiers and stock settings — the old shed, the old well, the old basement — that Shyamalan has plenty of dark places and dusty sharp implements to imply trouble with.

The film’s big reveal — which is more prosaic than it is paranormal — doesn’t carry much besides a brief sting of concern and shock: It doesn’t open the movie up, it shuts the film down, and once we know what’s going on, all that’s left is the shouting and the climax.

And that underwhelming climax, of course, is then undercut by two extraneous following scenes — one a swamp of sentiment, the other a burp of coarse comedy, and both unrequired. Shyamalan has had some difficulties as a director of late, and it’s understandable to hope that by placing him back in the realm of lower budgets and more manageable expectations he could impress us yet again; that turns out not to be the case this time.

Short but too simple, startling but never terrifying, “The Visit” may make a little money, but it does not mark a return to long-lost greatness for Shyamalan; instead, it’s more of the same, presented on a smaller, cheaper canvas where you can see every flaw all the more clearly.