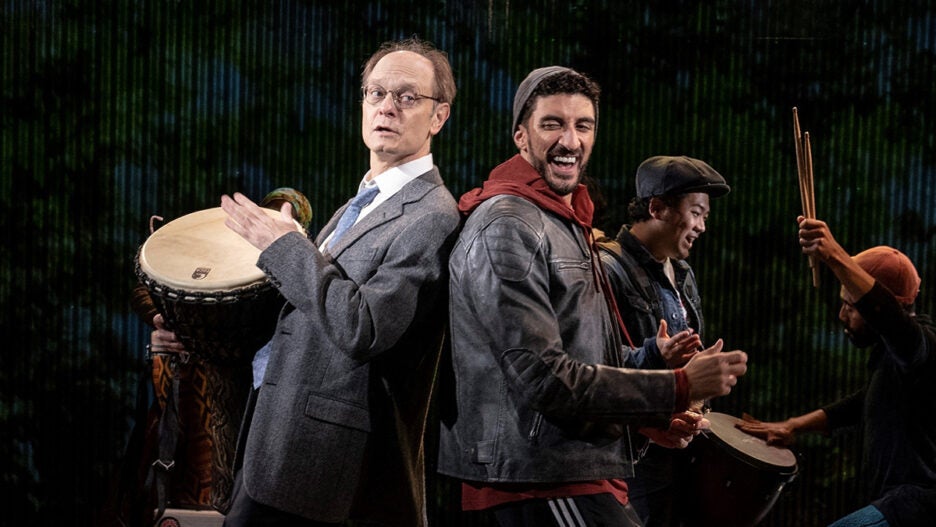 It’s not easy to write a musical about U.S. Immigration and Customs Enforcement, better known as ICE. Tom Kitt and Brian Yorkey, who brought us “Next to Normal,” a musical about bipolar disorder, have embraced the enormous challenge of putting to song the deportation of a young immigrant without proper documentation. Based on the 2007 Tom McCarthy film of the same title, “The Visitor” opened Wednesday at the Public Theater, and Kwame Kwei-Armah shares credit with Yorkey on the book.

Despite the subject matter, the jump from screen to the musical stage finds a convenient bridge in McCarthy’s screenplay, which makes the Syrian-born character Tarek an accomplished djembe player. Needless to say, you learn much more about playing drums from the musical than you do from the movie. Tarek and his Senegalese-born girlfriend, Zainab, are victims of a scam that has them Airbnb-ing an apartment owned by an economics professor, Walter, who is almost as shocked as his uninvited house guests when he returns to the city after a long absence.

David Hyde Pierce plays Walter, making it redundant to describe the character as repressed, conservative, uptight and basically good. Walter, in fact, is impossibly good, and few actors other than Hyde Pierce (and Richard Jenkins in the movie) could ground such an angel-human into someone who seems at home on the planet Earth. In the musical, Walter does everything for Tarek (Ahmad Maksoud) and Zainab (Alysha Deslorieux) that could be expected of a man who finds strangers squatting in his apartment. He doesn’t tuck them in at night with cookies and warm milk, but almost. 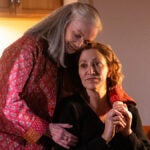 Also Read:
‘Morning Sun’ Off Broadway Review: Edie Falco Stars in a Version of ‘It’s Not a Wonderful Life’

To give Walter some edge, “The Visitor” (the musical as well as the film) gives this character a flaw, and it is the oldest trope in racial stereotyping: Because he’s white, Walter has no rhythm. Tarek, being a person of color, breathes rhythm and teaches Walter to play the drums. For a 90-minute one-act musical, this education takes far longer than it warrants.

In the film, Walter is an amateur classical pianist. Kwei-Armah and Yorkey’s book drops this avocation, and here Walter is just a good-hearted white klutz, and happily, his not playing the piano spares us any scenes of Walter teaching Tarek how to perform Chopin. According to “The Visitor,” djembe playing is the core of human existence; on the other hand, economics, the subject Walter teaches in college, is an unnecessary bore. Tell that to the starving children of the world.

Stickier than the rhythm thing, however, is watching yet another white character play Mother Teresa to the world’s oppressed. “The Visitor” is as well-intentioned as Walter himself; it’s also very patronizing. Tarek’s girlfriend seems to be aware of this glitch, but keeps it to herself instead of telling Kwei-Armah and Yorkey. 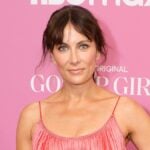 Also Read:
Laura Benanti Speaks Out About Her Broadway Injuries: ‘I Wake Up Every Day With Pain’

As one would expect from composer Kitt and lyricist Yorkey, “The Visitor” features several lovely ballads, the most poignant of them going to Tarek’s mother, Mouna, (Jacqueline Antaramian), another immigrant from Syria without documentation who risks deportation at any moment. Antaramian enchants the moment she steps into Walter’s apartment about halfway through the show. She’s not a young actor but her singing voice is, pure and rooted in the music and poetry of the often accomplished lyrics.

Kitt and Yorkey are wonderful at putting quiet but deep pain to song. What appears to be outside their range is red-hot anger, and “The Visitor” needs it to burn away some of Walter’s soft-soaping of humanity. This songwriting team attempt something fiery with the character’s number “Better Angels.” The song title defines what it is to be writing on automatic pilot, unfortunately.

For a musical that is based on a movie, “The Visitor” brings to mind yet another movie with the woebegone “Better Angels.” In 1990, critics roasted Alan Parker’s “Come See the Paradise,” a movie that viewed the internment of Japanese-Americans in World War II through the eyes of a husband (Dennis Quaid) separated from his wife (Tamlyn Tomita). Even 30 years ago, the movie’s white-man viewpoint created a sense of superiority, as if the suffering of the interned could only be validated if experienced secondhand by someone like Quaid.

With so much human desperation put on stage in “The Visitor,” it’s odd that Walter, and not one of the three immigrants, gets the big 11 o’clock number. Then again, maybe no character of color wants to sing something called “Better Angels.”

Speaking of which, in the role of Tarek, Maksoud takes over for Ari’el Stachel (“The Band’s Visit”), whose name still graces the Playbill. No matter, Maksoud delivers a strong performance that could but never settles for the easy sentimental gesture.

Far more aware of their immigrant predicament is Tarek’s girlfriend, and Deslorieux wisely keeps Zainab aloof toward Walter’s do-gooding. The musical expands her role from the movie, but not enough. “The Visitor” on stage needs more variety, not to mention plot, and Zainab’s fate too closely replicates what happens to Mouna.