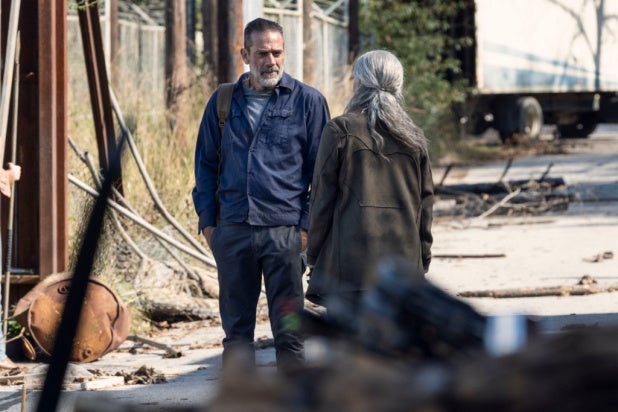 The last of the pandemic bonus episodes of “The Walking Dead” season 10 is quite a doozy, finally revealing Negan’s origin story in full. The timing on this is interesting, coming as the lead-in to the final season of the show.

There have been numerous allusions over the years to how Negan (Jeffrey Dean Morgan) ended up becoming the despot leader of the Saviors. We knew his wife died early in the zombie apocalypse. We knew that her death affected him so dramatically that he kinda snapped. But while some of that story was in the comics, the show had never really explored it until now.

Also Read: 'Walking Dead': Are Those White-Armored Soldiers Really From the Commonwealth?

His wife, Lucille (played Morgan’s real-life wife Hilarie Burton), was diagnosed with cancer shortly before everything went bad. And during her meeting with the doctor, Negan was hooking up with Lucille’s friend Janine.

Aside from the cancer thing, by the way, showrunner Angela Kang and co. did a totally new version of this story.

The combination of Lucille’s illness and the end of civilization reoriented Negan’s priorities. He did everything he could to keep Lucille going as everything fell apart, making a deal with some doctors for chemotherapy supplies and running afoul of some bad dudes who wanted to rob those doctors.

Understanding that the situation was getting out of hand — and that they couldn’t possibly keep these treatments going for much longer — Lucille made the decision to kill herself while Negan was out. That led to his first rampage, as he slaughtered the men who were robbing the doctors.

And that was the beginning of the Saviors.

Also Read: 'Walking Dead': Did We Just Meet the First New Character From the Carol and Daryl Spinoff?

The frame story for this episode is even more interesting. At the beginning, Carol (Melissa McBride) leads Negan out of Alexandria to a cabin that he had been considering moving into. She tells him that he doesn’t actually have a choice, because the town council decided to kick him out.

Negan, ever perceptive, realizes she’s bluffing — the council did not actually banish him, but Carol is saying they did because it’s just very difficult to imagine Maggie (Lauren Cohan) ever living in peace with this war criminal who murdered Glenn.

So Negan reflects on the situation and remembers Lucille’s story before finally burning that baseball bat and delivering an emotional monologue to his dead wife, telling her, “I’m going to do your fighting for you.”

And then he calls Carol’s bluff and returns to Alexandria. Ominous music plays. Negan and Maggie look at each other — Maggie seething, and Negan grinning confidently like he used to.

Also Read: 'Walking Dead': Everything We Know About the Reapers

It’s an emotionally confusing moment for those of us watching. This episode of “The Walking Dead” tells a story that you would, without the way that final scene was presented, think of as hopeful.

Negan has been a man adrift for a very, very long time, with no place in the world where he belongs. This episode is a come-to-Jesus moment for him, when he is forced to finally deal with his demons and make a choice to improve his situation and try to be better.

But that last scene just doesn’t quite play that way. This doesn’t feel like the beginning of an inspirational story of Negan turning over an entirely new leaf. Not with that music, and not with that grin. Do I think he’s about to go bad again? No, or at least I don’t think he wants to. His monologue to his dead wife makes it clear he’s not looking to return to his old ways.

But it also made it clear that he’s going to try something new. I don’t know if he’s got any sinister intent here — but it’s obvious that Maggie isn’t just going to be normal about whatever Negan is thinking of doing.