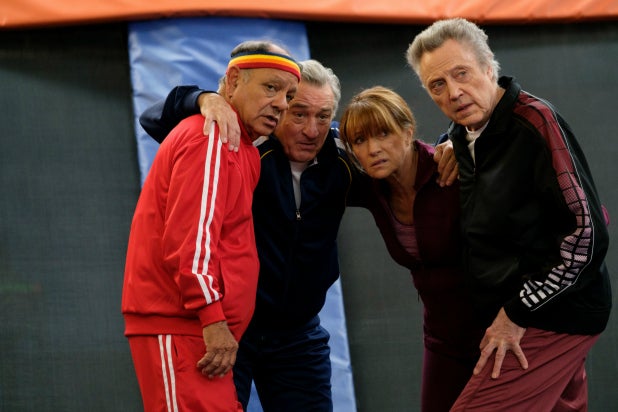 Remember, after “Heat” but before “The Irishman,” how crushingly disappointing it was to have Robert De Niro and Al Pacino re-teamed in the utterly forgettable “Righteous Kill”? “The War With Grandpa,” to be clear, is a much better movie than “Righteous Kill,” but anyone excited about a reunion of the stars of “The Deer Hunter” (De Niro and Christopher Walken) or “Mad Dog and Glory” (De Niro and Uma Thurman) should ratchet their expectations way, way down.

“The War With Grandpa” isn’t going to sully the reputation of any of these screen legends, mainly because it barely registers; it’s the sort of mildly amusing comedy that your brain begins flushing out before you even get to the closing credits.

De Niro stars as Ed, a grandfather to three kids, one of whom — Oakes Fegley (“Pete’s Dragon”) as Peter — has to surrender his room when grandpa comes to live with them at the insistence of Ed’s daughter Sally (Thurman), who realizes that Ed is past the point of being able to do his own driving. (There’s some talk about Ed and Sally both recovering from the recent death of Ed’s beloved wife, but that’s a plot thread that remains wispy at best.)

Annoyed at being moved up to the attic, which is plagued with bats, mice, and leaks, Peter declares war on Ed. Ed, the grownup in this situation, at first attempts to shrug it off, but when Peter won’t back down, Ed takes him up on the challenge, presumably to teach the kid a lesson about the futility of warfare but mainly to set up yet another post-“Home Alone” comedy about kids springing pranks and traps on their unsuspecting elders. (Three decades later, it’s at least nice that someone has made a comedy where the old guy gives as good as he gets.)

There are some random chuckles along the way, and the rivalry does build to a fairly amusing scene in which Peter and his junior-high friends take on Ed and his crew — buddies Jerry (Walken) and Danny (Cheech Marin), and Ed’s potential new love interest Diane (Jane Seymour) — in a winner-takes-all game of trampoline dodgeball. For the most part, though, “The War with Grandpa” seems like the sort of brightly-lit disposable family comedy that fills the Disney Channel schedule, only with an insanely overqualified cast.

The vets here are game, at least, even though poor Thurman gets saddled with having to be a scoldy pill as both a mother and a daughter; the movie at least gives her one bit of physicality in the final scenes that make you wish she’d been able to go all Beatrix Kiddo on these whiners from the jump. Fegley has shown himself to be an empathetic young actor in films like Todd Haynes’ “Wonderstruck,” and he manages to keep Peter from being as insufferably entitled as he could have been. I could have watched a whole movie of De Niro interacting with young Poppy Gagnon (“Fun Mom Dinner”) as Jennifer, Peter’s Christmas-obsessed little sister.

“The War with Grandpa” has the tidy suburban sheen we’re used to seeing in so much of the film and television that’s aimed at children, and director of photography Greg Gardiner (“Little”) appears to be giving director Tim Hill (“Hop”) exactly what he wants in that regard. There’s a bit of darkness at the very end, with a final scene that seems to be setting up not just a sequel but also a horror-movie version of this same plot.

The little sister’s Christmas-themed birthday party allows the production and art-direction team to create a Yuletide-in-September set that outshines much of what Hallmark Channel creates every year, and kudos to whichever stunt performer seamlessly creates the illusion of Seymour’s character doing mid-air flips in the dodgeball sequence.

Movies aimed at children, like food aimed at children, generally fall into three categories: “Poison,” “Actually Good for You,” and “Eh, It Won’t Do Any Lasting Damage,” and no one’s going to accuse the barely-there “The War With Grandpa” of having any lasting effect.

It might be nearly impossible to catalog all of Robert De Niro's finest roles across decades of being one of America's greatest actors. He has given audiences many of the most iconic movie lines of all time. Here are just a few of those greatest bits of dialogue.